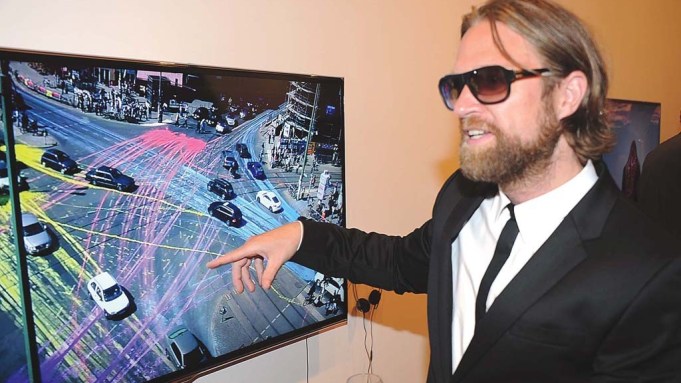 LONDON — With two decades behind it, Hugo — Hugo Boss’ contemporary offshoot — is celebrating its birthday by bringing together 20 contemporary creative talents for a pop-up exhibition at London’s Saatchi Gallery, where Hugo Boss is the ongoing special projects partner.

The brand enlisted the assistance of Berlin-based cultural community Platoon and its global network of experts to recruit the 20 artists and collectives, whose work is on display until Sept. 1 in an exhibition called “Red Never Follows.”

“The curatorial focus lies in the visual attraction, the playful interaction and the inspiring innovation,” said Hugo Boss’ head of cultural affairs, Dr. Hjoerdis Kettenbach. “The edgy, artistic approach of the exhibition expresses the spirit of Hugo. Urban creativity reaches into strategies and genres on the edge of design, science and lifestyle worldwide. Each individual or collective represents the most innovative approach within their diverse creative scenes.”

According to Kettenbach, the artists and creatives on exhibit were chosen because “they all share the curiosity of not following, and the desire to find new ways of creative expression — either visually, technically or through interaction with the audience. To reveal the resulting inspirational potential is the main objective of this project.”

While some of the works were commissioned for the project, others were preexisting but “are nevertheless representative of the Hugo mind-set” — resonating with the brand’s principles of innovation, rebellion and individuality, the company said.

At the rebellious end of the spectrum is a video installation from Dutch artist Iepe Rubingh, who staged a guerrilla painting event in Berlin in 2010, during which 2,000 cars unwittingly helped to apply 500 liters of water-based environmentally friendly paint to the asphalt “canvas” of Rosenthaler Platz. The paint was distributed by baskets tipped over by cyclists, who had to be ferried away in haste before they were arrested by local police.

“We had a truck waiting around the corner, where they could drive into once they had deposited their paint on the street. Then the truck drove away, not leaving any trace of the bicycles,” explained Rubingh during a preview of the exhibition. “We didn’t ask permission, I guess it was a criminal act. But it rained the next day, so it all washed away.”

The theme of rebellion is also at play in French street artist Victor Ash’s giant graffiti dog biting its own tail, which Ash was commissioned to paint directly onto the wall at the gallery. “I truly liked the idea of ‘Red Never Follows,’” Ash told WWD. “So I thought about following, and how a dog is always following people. Then I thought about the idea of following yourself, and then I pictured a dog following his tail so he turns around following himself.”

Among the other works commissioned is a red plastic dome by Marco Barotti that creates music based on the heart rate of its inhabitants, and a film by Bart Hess called “Mutants” that shows a latex-encased body moving in a slow and beautiful struggle as lights play out on the plastic surface.

“I really love the projection [by Felix Bonowski], if only my place was big enough for it,” said “Game of Thrones” star Natalie Dormer, who is just about to start filming the show’s fourth season. She was in an ultralow-cut Hugo dress at the party here Tuesday night to mark the opening of the exhibition. Will any of the “Games” characters ever see a happy ending? “I really can’t say, I’ll get in trouble. But read ahead, you’ll see,” said Dormer.

David Bailey attended the party en famille, surrounded by sons Sascha and Fenton, and wife Catherine. The photographer wasn’t particularly moved by the works on display. “No, not really,” he said when asked if there was anything he’d like to take home with him. “I don’t like gimmicks. I like a nice white background.”

“That thing there looks like a pool cleaner,” he added in reference to Sonice Development’s wall-drawing robot.

Favorites at the exhibition included Güvenc Özel’s “breathing” installation that moves in response to human thought patterns; Christopher Barrett and Luke Taylor’s (Us collective’s) music video and accompanying installation for Benga’s song “I Will Never Change,” and the pitch-black room lit with dark lights to show off Jeongmoon Choi’s linear glow-in-the-dark patterns, in which one anonymous partygoer commented, “Big glasses of Champagne and teeny, tiny canapés — just the way it should be.”