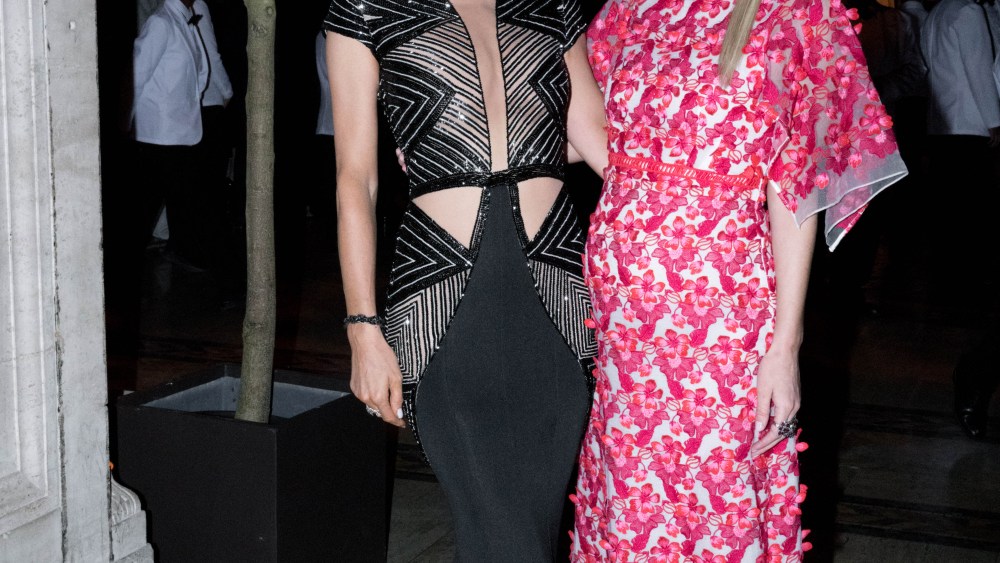 On Tuesday night, the model set flocked to Cipriani’s newest downtown outpost, the Great Hall at 25 Broadway, where they could be found sipping Bellinis, taking selfies in front of a gorgeous live flower wall, and blowing air kisses on the step-and-repeat. The Foundation Fighting Blindness was hosting its annual World Gala chaired by Keith and Inga Rubenstein, along with event chairs Natasha Poly and Irina Shayk, both of whom were on hand for the evening.

Ajak Deng, Crystal Renn, Magdelena Frackowiak, Valentina Zelyaeva, Anna Cleveland, Alina Baikova, Mina Cvetkovic, Cat McNeil and Madison Headrick towered over most guests, upping the party’s model-to-mere-mortals ratio. And then there was Leonardo DiCaprio (natch), who arrived after the cocktail hour and planted double-cheek kisses on model Georgia Fowler before taking his seat. Victoria’s Secret model Rachel Hilbert admitted she was pretty new to the whole gala season thing. “I’m slowly figuring this all out,” she said, smoothing her royal blue Zac Posen gown over her curves. “There are a lot of models here, so I’m making my rounds.”

The event, which raised nearly $2 million toward research to fight retinal degenerative diseases, honored Vionnet’s Goga Ashkenazi for her philanthropy. “I try to concentrate on charities that have touched my heart and my personal life,” she told WWD. “Some of my friends have been affected by [retinal diseases] and I’ve been given signs that I needed to participate…to make little steps on the big road to reducing the suffering [of blindness.]” The U.K.-educated Ashkenazi said she was looking forward to seeing Jerry Seinfeld on stage, where he’d be performing stand-up. “American or not, we all grew up with [the sitcom, ‘Seinfeld’].”

After a short film and a moving speech by French philosopher Bernard-Henri Lévy, Seinfeld lightened the mood with his 20-minute set, dwelling on the usual petty annoyances, daily minutiae and marriage (“Being married is like a game show and you’re always in the lightning round.”) His most recent gripe: theater staff requesting that moviegoers pick up the trash around their seats before exiting. “I’m not picking up the garbage,” Seinfeld said. “I’m the one that threw it down. There’s a deal between us and the movie theater….They sell us oversized, overpriced crap we shouldn’t be eating to begin with. In exchange for that, when I’m done with something, I open my hand and I let it roll down to the floor.”

A live auction — led by Simon de Pury, who was assisted by a rotating cast of models — offered a Paris Couture Week experience; VIP tickets to an upcoming performance of Rihanna’s “Anti World Tour”; custom portrait sessions with Marc Quinn and Sante D’Orazio; and — fittingly, considering the audience — two tickets to the next Victoria’s Secret Fashion Show. At one point, Paris Hilton took to the stage, tasked with helping de Pury shill a vacation package to the Maldives. “It’s one of the most incredible places I’ve ever been to in my life,” she cooed. “I just went for my birthday a few months ago, and I had never been to anywhere more magical, special, romantic, sexual and beautiful.” Sold.