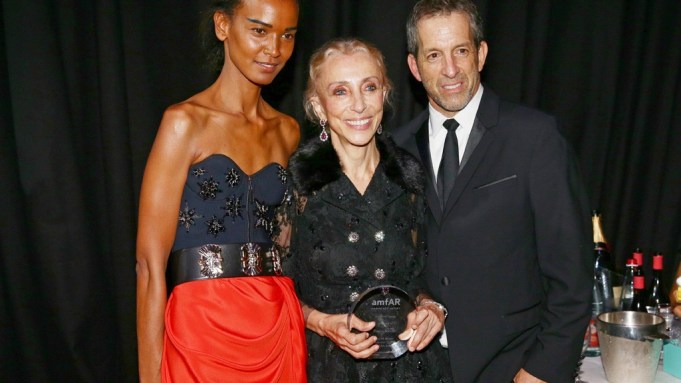 “Tonight we’re celebrating how far we’ve come, and we’re doing it with an industry that’s been so supportive,” said amfAR chairman Kenneth Cole. “Franca Sozzani has been kind of the master of ceremonies, and she’s helped guide and steer.”

Accepting an Award of Courage from Cole, Sozzani slyly acknowledged using her industry clout to guarantee attendance at Convivio, the biennial Milanese AIDS fund-raising event founded more than 20 years ago.

“Even if they don’t want to, they come,” she said to laughter from the room. “Please don’t forget that in June 2014, we’ll have Convivio. And please don’t ask me if you have to make it. Do it, and don’t ask me.”

Lewis was at the Toronto Film Festival earlier this month for the premiere of “August: Osage County,” in which she appears alongside Meryl Streep and Julia Roberts. The actress and singer will also be seen in “Hellion” opposite “Breaking Bad” star Aaron Paul, and she has a role in “Wayward Pines,” the upcoming Fox television show starring Matt Dillon and produced by M. Night Shyamalan.

Chairs of the evening included Vionnet owner Goga Ashkenazi, who wore a 1937 gown from its archive and said she was looking to expand its Paris headquarters. “I would like to make a little museum or coffee shop — somewhere where people can come and read about Vionnet,” Ashkenazi said.

During the auction, Roberto Cavalli got into a spirited bidding war with another guest for a diamond-studded Hublot watch. After the brand agreed to donate a second one, the timepiece sold twice for a combined 200,000 euros, or $270,400.

Afterward, guests enjoyed a live performance by British singer Katy B before the after party featuring a DJ set by Chelsea Leyland.