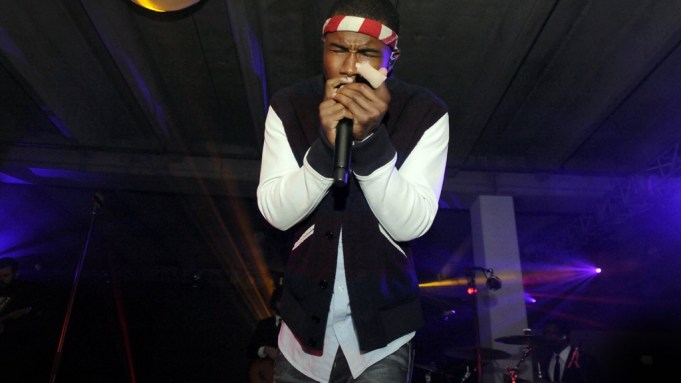 OCEAN’S SIDE: Levi’s capitalized on Grammy weekend on Friday with “An Evening for the Archives,” a 140th-anniversary exhibit of the 501 jean at Los Angeles’ Ace Museum, where man of the moment Frank Ocean provided the night’s entertainment.

“My mom used to work in construction and was such a strong woman, she would always rave about her 501s,” explained “Revenge” actress Christa B. Allen. “I didn’t get it at the time, but now I realize that literally everyone and their mother have had or will have a pair of 501s in their lifetime — they’re iconic.”

Taking the stage in his signature red and white striped bandanna and cuffed 501s, Ocean played for about 30 minutes. Nominated in six major categories including Best New Artist and Album of the Year for “Channel Orange,” (which had to settle for best urban contemporary album) the crooner was calm and collected as Zoe Saldana, Solange Knowles and Macy Gray sat front and center swaying along to the rhythmic set. He ended the evening with his hit “Thinking Bout You.”