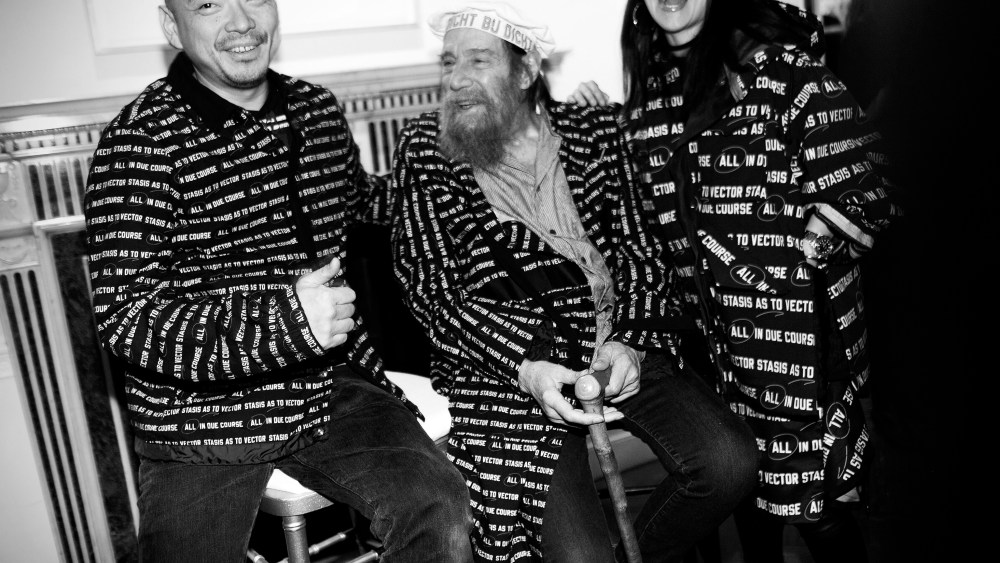 Lawrence Weiner held court Wednesday evening on the second floor of the grand Ukrainian Institute of America as supporters of the Free Arts NYC 19th annual Art Auction floated by to greet the evening’s honoree.

With a glass of whiskey in hand, the bewhiskered New Yorker proudly extended his arm to display the typographical fabric of his Sacai jacket, which was the result of a collaboration he did with the Tokyo-based label’s founder and designer Chitose Abe for her spring 2018 collection.

“Everything you see from the collaboration is thanks to the Sacai designers,” explained Weiner of the brand that cosponsored the event, which raised nearly $1 million to help provide educational arts and mentoring programs to underserved children. “The typography is something I designed, but so what? I don’t have a blasé attitude and I’m not humble, but I do know what I deserve credit for.”

But according to Abe, the 76-year-old, who was a central figure to the Conceptual Art movement in the Sixties, deserves far more credit than he’s willing to admit. “It was because of Lawrence that this came to be,”explained the demure designer ahead of a gala dinner, which was also sponsored by the Marian Goodman Gallery, Crozier and Perrier-Jouët. “I’ve always admired his work so I went directly to him and asked if he would work with us.”

“Isn’t that nice?” exclaimed Weiner of Abe’s sentiments. “When people are working together and really engaged, they both say the same thing about each other.”

Abe, who established her own label in 1999 after eight years at Comme des Garçons, boasts past creative partnerships with Nike and The North Face. However, the hands-on designer says it’s essential for her to maintain total ownership of the Sacai brand in order to be “in charge of everything and have control of myself.”

The Japanese creative, who for years would produce collections almost entirely by herself, now works with a team, but the concepts and silhouettes of her pieces are still entirely her brainchild. “I like to take what seems very conventional and familiar to create a completely new shape. That’s partly why I was drawn to Lawrence, too, because there are so many different ways to interpret his work.”

When asked her opinion on fashion’s role as art, Abe paused momentarily. “That’s a tough question,” she offered. “The thing about clothes is that they come alive when they’re worn and it has to be accepted that way. In a sense, this is another link to Lawrence because I think he has that attitude about his own work, too.”

The lavish 1890s mansion was dotted with many other artists — and their works — including Olympia Scarry, Mia Moretti, Matthew Day Jackson and Eddie Martinez who all donated pieces that were auctioned in support of the organization. Also on display were works from Free Arts NYC teens who last month visited Weiner’s Greenwich Village studio. “The kids we’re working with are the ones that are really the big success here,” Weiner added.

Brooklyn-based artist Josh Reames — who gave his 2016 painting “Sun Set” to the cause — leaned casually against a carved wood bannister as the four-piece jazz band Onyx Collective played during the cocktail hour. Sipping a glass of Champagne, Reames revealed his work is “very reactive” and derived from “ingesting random minutiae, digesting it and pushing it back out with aesthetics.” When asked what the 32-year-old is focusing on, he quickly replied, “right now it’s a lot of baseball, but I’m not trying to make sports paintings.”