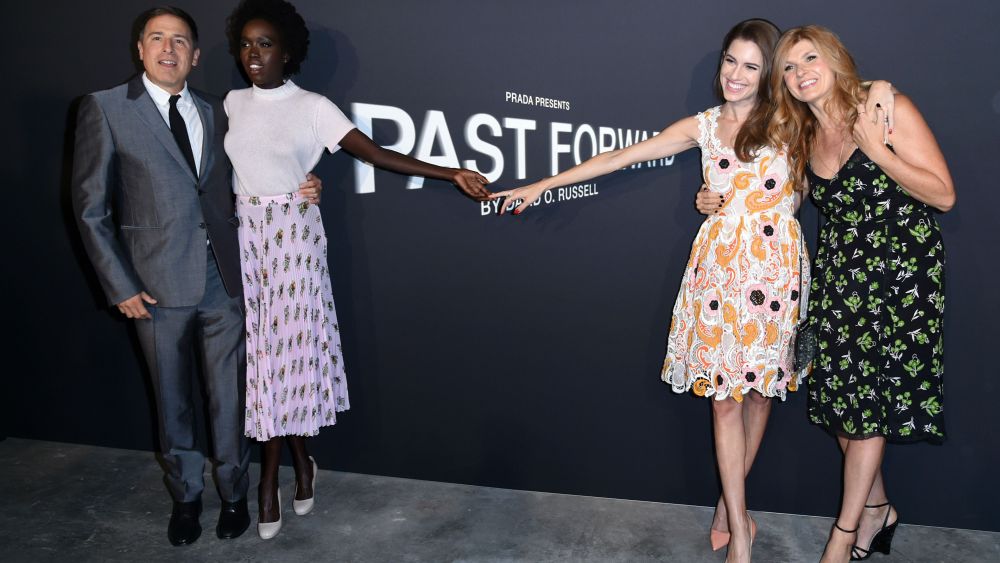 As “For Your Consideration” billboards began popping up across Los Angeles in anticipation of awards season, Miuccia Prada came to Tinseltown on Tuesday night to solidify her standing with stylish celebrities. Following her first flirtation with Hollywood expressed via a lavender dress worn by Uma Thurman at the Oscars in 1995, the designer welcomed an array of guests at Hauser Wirth & Schimmel’s sprawling gallery for a screening of David O. Russell’s short film that she helped create.

In the black and white movie that was filmed at signature Southern California spots, spanning from The Broad to the beach, Pinto, Allison Williams and Kuoth Wiel portray heroines who were rescued from Cohen’s man with no mouth by Jack Huston, John Krasinski and Sinqua Walls, respectively. Connie Britton and Paula Patton play a pair of fierce females who, like the other characters, aren’t overtly good or evil. After the film premiered in front of a crowd that squeezed onto benches and overflowed toward the doorway in a cavernous room stocked with unopened wood crates in one corner, one man told Michele Lamy, Rick Owens’ wife: “I was thinking of ‘Fahrenheit 451.’”

“That was the whole idea,” Britton said of the characters’ ambiguity. “You weren’t sure. Nobody can be defined in one way.” In addition to having fun working on the film, the actress with ravishing red hair also relished in “just getting to wear Prada,” she said. To be sure, on TV, “I get to wear pretty amazing stuff on ‘Nashville.’” She realized how good she had it once she stepped onto the set for her low-budget movie called “Beatriz at Dinner,” which she likened to “Who’s Afraid of Virginia Woolf?” “It was a beautiful Banana Republic dress,” she deadpanned.

Walls also eased from a Prada suit to Nineties-era hip-hop duds for his role as a music manager in “The Breaks,” a series that will air on VH1 next spring. “I like to mix it up,” he said.

Milla Jovovich is tossing together contrasting roles and wardrobes in a trio of new projects: “Future World” featuring James Franco, which she dubbed a “post-apocalyptic fairy tale;” “Shock and Awe,” in which she plays a war journalist’s wife, and the sixth edition in the “Resident Evil” video game movie franchise, which was directed by her husband, Paul W.S. Anderson. “It’s even better,” he assured of the action flick, which is out in January.

The Hollywood set also made time for charity. When not feeling “so much sadness” for the final season of “Girls,” Williams traveled to Rwanda and Kenya for the charity Red and worked on a documentary about education. Describing her producer role on the series, she said, “I’m the Willy Wonka of it.”

While Williams and other celebrities made a discreet exit shortly after the credits for “Past Forward” rolled, Olivia Munn and Edgar Ramirez lingered at the bar. Bell, who’s finishing the final season of “Turn: Washington’s Spies” and played the young lover of Annette Bening’s Gloria Grahame in the movie titled “Film Stars Don’t Die in Liverpool,” made the most of his free time with Kate Mara. Earlier that day, the two checked out director Guillermo del Toro’s exhibition at the Los Angeles County Museum of Art.

“She’s a massive art collector,” Bell said of his paramour. Bursting into laughter, Mara replied, “He’s being sarcastic. We have zero intellect when it comes to art. If there’s a movie involved, we’re there.” They were certainly at the right place for date night.