On Tuesday night, Pinto wore Reem Acra to a screening of her newest film. 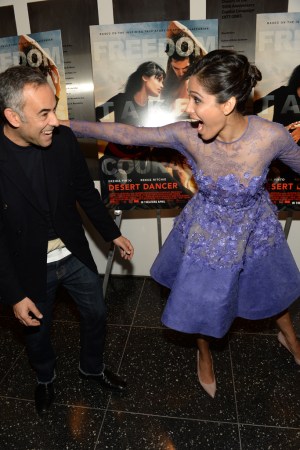 On a misty Tuesday night in Manhattan, a bunch of people converged at the Museum of Modern Art to talk about an important activity forbidden in Iran: dancing.

“I didn’t know that dancing was forbidden in some parts of the world,” exclaimed Mumbai native Freida Pinto, who was the starriest cast member at the screening of “Desert Dancer,” a biopic based on the life of Afshin Ghaffarian, an Iranian dancer who formed an underground dance company in Tehran, in the midst of the volatile political climate of 2009. He later sought asylum in France, where he currently resides. “Coming from a culture where dance is part of my everyday life, this was a very new concept. It’s something that I just couldn’t figure out,” Pinto said.

For the film’s cast, politics wasn’t the challenge — dancing in the desert was. “It was so strenuous,” Pinto confessed, hands tucked into the pockets of her frothy Elie Saab. Actor Reece Ritchie, who was sought out for the lead role because of his physical resemblance to Ghaffarian, agreed. “I’ve got a real respect now for dancers,” he admitted.

The festivities spilled over to the second floor of the Baccarat Hotel across the street, where moviegoers went afterward to toast the movie — a precarious task, given that the towering crystal Champagne flutes retail for $260 a pop (needless to say, glass clinking was on the delicate side). “Once you have an idea, just go for it,” Costa mused on the topic of creative pursuit. “Sometimes you do things out of the box, or in an unorthodox way. Sometimes you have to break the rules.”