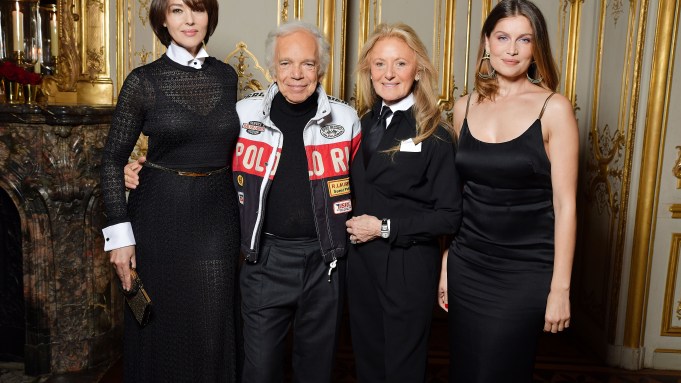 Ralph Lauren, who exhibited his car collection at Les Art Décoratifs in 2011, was in a racing mood Wednesday night in Paris for a screening of the HBO documentary “Very Ralph.”

“I just made it,” he said. “I went to my restaurant in New York wearing this. I never had so many comments.”

Isabelle Adjani, Marisa Berenson, Monica Bellucci and Laetitia Casta were among guests at the swanky evening, which culminated with a sumptuous dinner amid thousands of red roses, some bouquets as big as wrecking balls.

Poured into a slinky black gown with a bare back, Casta said she just wrapped filming a TV series for Arte called “Une île” in which she portrays a murderous mermaid. “It’s a fantasy thriller with a lot of special effects,” she related. “It’s quite different for Arte. The message is ecological and feminist.”

The French model and actress landed one of her first jobs doing a campaign for Lauren when she was barely 15 years old. She would go on to become the face of one of his fragrances, Notorious, in 2008.

“So moving,” Berenson swooned after the screening, which included reams of family movies of the American designer, his wife Ricky and their three children. “It’s rare to find a family that’s so united. That message of love and real family values — nothing superficial about it. He encourages people to follow their dreams and to believe in them.”

“I got an airplane,” Lauren marveled.

The designer was headed to London for the final stop of his European tour, following screenings of the Susan Lacy movie in Berlin and Moscow.