The group has raised millions for French cultural events at the embassy in Washington. 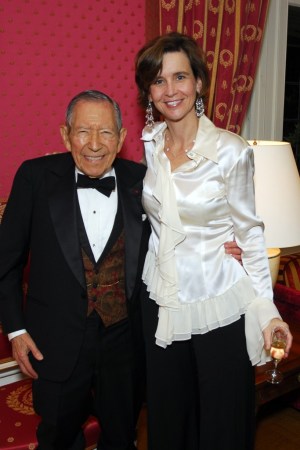 “This foundation is my best ally in the area of cultural diplomacy,” said French Ambassador Francois Delattre, welcoming 40 guests to a small dinner for a big organization: the French-American Cultural Foundation. The group has raised millions for French cultural events at the embassy in Washington, including “Kids Euro,” the first entertainment festival for children. This fall’s celebration featured 200 performers offering free shows for 20,000 kids. Guest of honor David McCullough, the Pulitzer Prize-winning historian and author of “The Great Journey: Americans in Paris” hummed “On Moonlight Bay” and “Mimi” to his wife, Rosalee, as guests arrived.

Fresh off the plane from Paris, Christophe Navarre, president of Moët Hennessy Group, underwriters of the dinner, livened things up with his partner Tonilyn Gugenheim, who flounced about fetchingly in a supershort Louis Vuitton cocktail dress.“We just flew in on Air France and it took us two hours to get through the traffic,” said Gugenheim who, like most of the French contingent, was struggling with jet lag. Foundation president Leonard Silverstein sported a tapestry woven vest made by Charve. “They were tailors for Marcel Proust,” he explained. The dinner, accompanied by vintage wines from LVMH Moët Hennessy Louis Vuitton’s Chateau d’Yquem cellars, ended with Ann Nitze auctioning off $50,000 worth of prime LVMH spirits at well below catalogue estimates. “This group is too small,” whispered one LVMH executive.