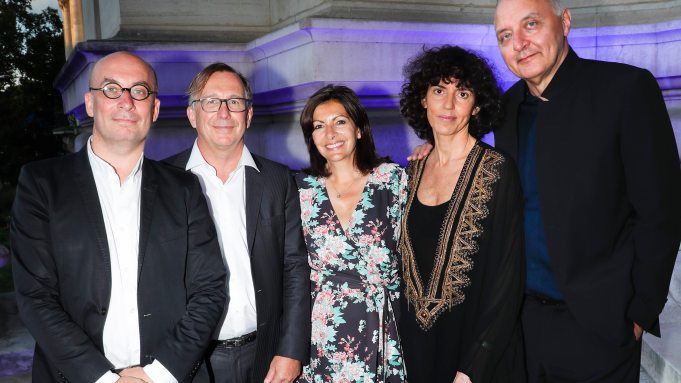 PARIS — Guests arriving at the Petit Palais at the end of a marathon last day of Paris couture shows were surprised to find Paris Mayor Anne Hidalgo in the receiving line for a cocktail party celebrating the 150th anniversary of the Fédération de la Haute Couture et de la Mode.

“I completely support [the federation]. We work together very, very well,” she said, adding she was tied up this week with a meeting of the city council, which approved the construction of a temporary structure next to the Eiffel Tower where Chanel will stage its catwalk shows once the Grand Palais closes for renovations in 2020.

Viktor Horsting and Rolf Snoeren were getting ready for a vacation after their show, which marked the 25th anniversary of the Viktor & Rolf brand. Snoeren has signed up for kitesurfing lessons near Lisbon, while Horsting was going on a Mediterranean cruise. “It’s basically a floating club with a lot of men dancing,” he deadpanned.

Guests were buzzing with new projects. Alexis Mabille has just opened a new store at the Ritz hotel on Place Vendôme, while Louis-Marie de Castelbajac revealed he has taken over as creative director of workwear maker Lafont, founded in 1844, which makes it even older than Levi’s.

“They were the inventors of the salopette, the overall,” he noted. “Workwear, like military clothes, it’s the actual definition of timelessness. It’s utility, and so when you add some poetry to that, it brings a whole new notion of contemporary workwear.”

Morand reminded guests there was still a full day of fine jewelry presentations to take in, before giving the floor to singer Jeanne Added. As the sun set over the French capital, no one seemed in a hurry to go home.