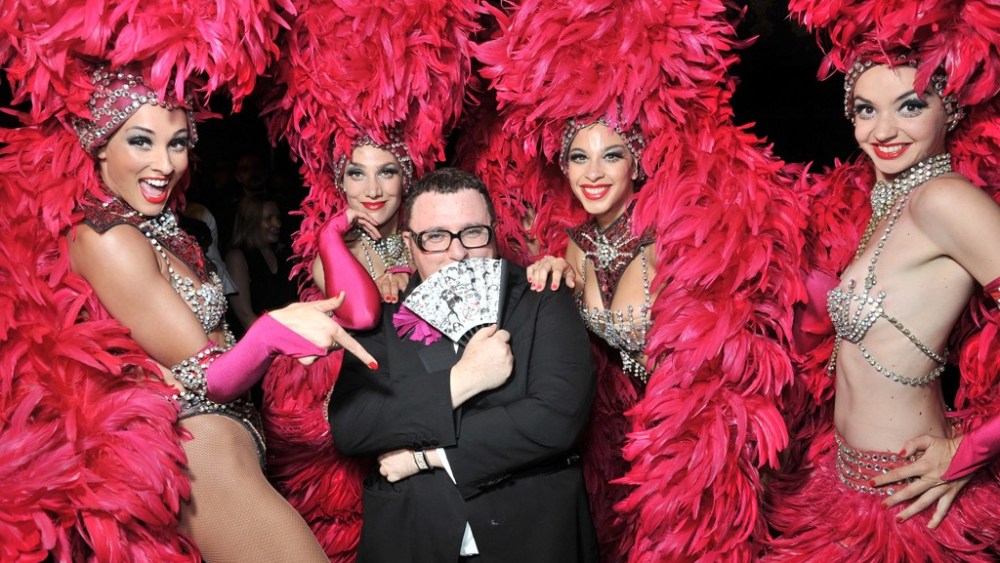 From showgirls and fountains to a full-on barbecue, the bumper crop of parties at the tail end of couture week in Paris had it all.

The heaving bash Lancôme and Alber Elbaz threw at Le Trianon theater to fete their collaboration on eye makeup was steamy enough to make mascara run. Lanvin’s designer grooved to a live set from the rock band Texas in a near-pitch-black VIP area roping off the likes of Gemma Arterton, Daria Werbowy and Zhang Ziyi.

What does Elbaz look for in people’s eyes? “The truth,” he shouted over the music as waiters passed around eye masks and ice quickly melted in gin and tonics. Arterton must have had secret intel on the heat, given her barely-there one-shoulder dress and her makeup policy that night. “None at all,” she said.

Bulgari’s party for its Diva collection spilled into the cool garden of the Hôtel Potocki mansion. Bradley Cooper got almost as much attention as the spectacular jewels. A 10-foot journey to the bar took him forever, with female guests stopping him at every step to pose for photos.

Carla Bruni-Sarkozy, who appears in the ads for the new line, worked the crowd in a necklace bearing a 43-carat sapphire. She showed guests pictures of her baby daughter, Giulia, on her iPhone and reminisced about her mother’s Bulgari stash. “That was a different era, and I have really magical memories of my mother taking out her jewelry,” she said. “It was always a little like a fairy tale.”

Houston philanthropist Becca Cason Thrash was sporting de Grisogono earrings, but she had an excuse: They matched her dress perfectly. “Fashion first, right?” she shrugged.

Other jewelers hosted swanky affairs in historic locales. Dior laid out a seemingly endless table decorated with pink bouquets at the Château de Versailles for 100 or so of its fine jewelry clients, along with Leelee Sobieski, Victoire de Castellane and Raf Simons.

Boucheron underwrote a ball at the Comédie-Française — the last was held in 1934 — for which Carole Bouquet piled her hair in a sculptural updo, and Ziyi donned a fishtail gown fresh from Giambattista Valli’s couture runway. Handlers doted on her train as if at a wedding.

“Normally I rush home for Fourth of July, but this time I was like, you know what, I’m going to celebrate with all the Americans that are out here,” said Humberto Leon, who with Kenzo co-creative director Carol Lim hosted a barbecue at the Bois de Boulogne to unveil Kenzo’s fall ad campaign, developed in collaboration with Toilet Paper magazine.

Guests including Léa Seydoux, Ellen von Unwerth and Toilet Paper founders Maurizio Cattelan and Pierpaolo Ferrari sat around picnic tables and played with sparklers as night fell. A line quickly formed for the fries, hot dogs and burgers served up by the team from buzzy local eateries Little Fernand and Big Fernand.

Karl Lagerfeld and Fendi brought a when-in-Rome sense of dolce vita to its three-part fete, which had the likes of Sharon Stone, Rose McGowan and Chiara Mastroianni shuttling between the brand’s new Avenue Montaigne store, a Lagerfeld photo exhibition by the Seine and a dinner under the frescoed peristyle of the Petit Palais.

The weather was more Scotland than Italy, so organizers draped white fabric throws over the shoulders of guests. “It’s like a mink,” cooed Dolores Chaplin, as she arranged the fabric like a fur stole. (Actually, it bore the label Zara Home — the price tag still dangling.)

Before sitting down at a table hosted by Bernard Arnault, Stone recalled the period she spent in the Eternal City while filming a John Frankenheimer movie.

“I rented an apartment across from the Coliseum. I liked that it had an Etruscan foot for a doorstop,” she marveled. Stone even played tour guide once: “Dick Cavett came to town and there was no one to pick him up at the airport, so I said, ‘I’ll do that.’”