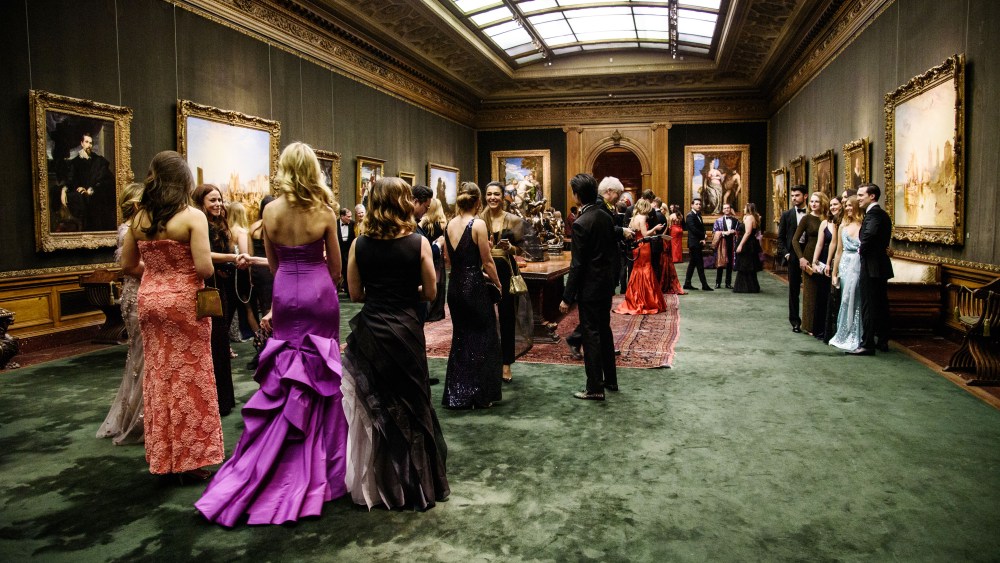 A parade of shifting chiffon and tidy tuxedos poured into the grand foyer of The Frick Collection Thursday evening as guests arrived for its annual Young Fellows Ball. At the center of the Upper East Side institution, a tableau of angry-red branches and ethereal white clouds beamed down from a projection on the Garden Court’s arched ceiling, which gave a visual nod to the evening’s theme: “Virtue and Vice.”

“Procrastination is a vice of mine,” remarked Niall Sloan, the recently appointed global design director of Escada. “My virtue? My virtue is providing a wardrobe for a strong, confident woman.”

Sloan, who joined the 40-year-old brand last August after holding creative roles at both Burberry and Hunter, was able to offer his sartorial guidance to many of the museum’s supporters as Escada sponsored the evening. “I don’t want to give it back,” exclaimed event co-chair Amory McAndrew as she twirled in a gown on loan from the Germany-based label.

Wearing a casual white suit — sans tie — Sloan went on to explain his excitement at joining the brand, which was founded by the late Margaretha Ley in 1978. “She was a Swedish model, her husband [and cofounder] was German, they called the company ‘Escada,’ which is a Portuguese word and also the name of an Irish thoroughbred racehorse they bet on when they were on their first date. So it’s a very European-centric brand.”

Referencing the recent and seemingly unwavering runway trend of looks echoing the Eighties and Nineties, Sloan noted his vision for Escada is to “reconnect with [Ley’s] spirit of the brand and give women a chance to feel beautiful, glamorous and support them to do what they have to do. We have a woman who is very confident in her own style. She’s no shrinking violet.”

This sentiment was certainly evidenced by the lively display of bouncing bodies that filled the dance floor as DJs Timo Weiland and Nicole Rosé played a mix of classic and modern dance tracks under the watchful eye of several of the museum’s Old Master portraits. Among the crowd were Gillian Hearst Simonds, Lydia Fenet, Caitlin Davis, Toby Milstein, Larry Milstein and The Frick Collection’s head curator Xavier Salomon, who explained the event’s theme was based on a 16th-century painting by Paolo Veronese called “Choice Between Virtue and Vice.”

Shoe designer and event co-chair Sarah Flint floated past this massive work on permanent display in the museum’s East Gallery, but remarked how she prefers a nearby set of oil paintings by J.M.W. Turner. “I love that you can come here and feel like you can see everything without being totally overwhelmed,” she explained of the museum’s manageable single floor.

Flint revealed her own vice is “probably not slowing down and getting too wrapped up in the next big thing.” Perhaps understandable given the industry changes she has seen since launching her eponymous label nearly five years ago. Last November Flint, who was a presence at department stores including Barneys New York and Bloomingdale’s, decided to pull her product from retail shelves and enact a direct-to-consumer model.

Molly Moorkamp drew ample attention as she drifted through the museum’s ornate Fragonard Room in its gilded Louis XIV style. “Is this Escada?” asked one guest of her vibrant fuchsia frock adorned playfully with large teal bows. “It’s actually my own,” she proudly replied.

The New York-based designer, whose resume includes work at Oscar de la Renta, Marchesa and Ralph Lauren, has recently created custom bridal, evening and cocktail pieces and will launch her own label this coming fall. Moorkamp, who is partnering with brother Sam Moorkamp on the endeavor, explained she hopes to replicate Flint’s direct-to-consumer business model with her own collection.

Next month she launches a capsule collection on pal Natalie Bloomingdale’s e-commerce site The SIL, which she described as “very exciting.” But how does Moorkamp reflect the gala’s theme in her own life? “Oh that’s easy. Coca-Cola is my virtue and my vice is a dirty Tanqueray martini,” she declared.