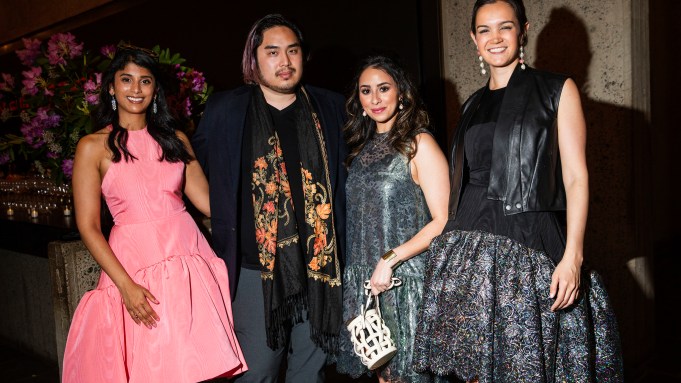 The floral prints were out Monday evening at the Frick museum’s temporary home at Frick Madison, for the museum’s annual spring garden party. While the festive spring theme works better in an actual garden (the original Frick building is under renovations), partygoers didn’t seem to mind the concrete modernism of the Madison location, breaking out their most colorful and springy looks for a night of jazz, dancing and art.

Emerging designer Bach Mai was in attendance with four friends who he dressed; Mai is a Young Fellow at the Frick, which he joined three years ago when he moved back from Paris.

“The garden party was actually my first event when I came back,” he said in the lobby’s entrance. The women he dressed were friends he’s been dressing for years, he said, and it felt like a full circle moment to get to put them in his own line, which launched in October.

“It’s nice to see real women in my clothes. It’s nice to know that when they put it on they feel amazing,” he said. “Celebrities are great and all, but the most amazing thing has been dressing real girls, the girls that I have grown up dressing. It’s been nice to connect to real women who are responding to the clothes and loving the clothes. All I want to do is make women feel beautiful.”