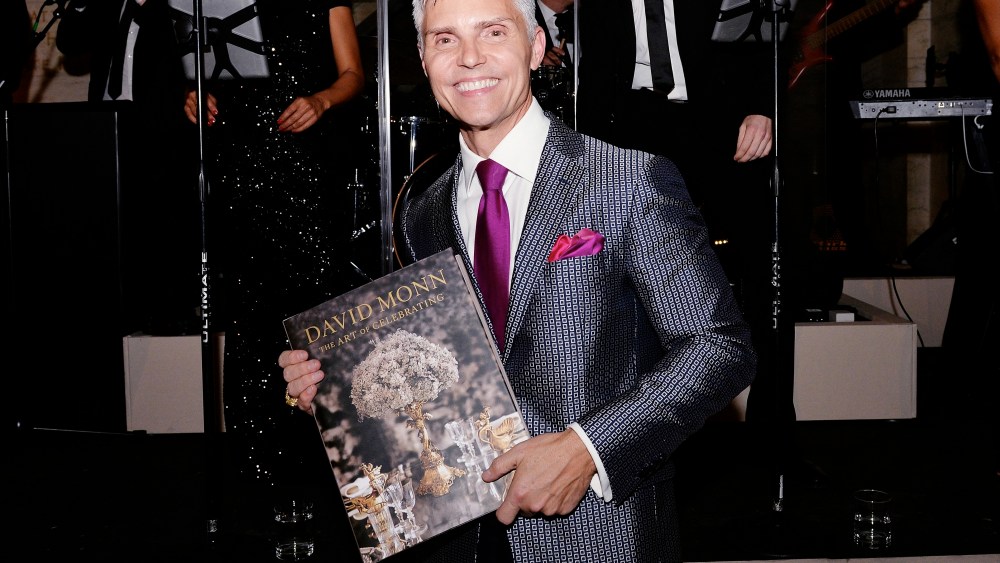 Standing beneath one of several 18-foot birch bark-covered cones entwined with wild smilax in the New York Public Library, David Monn looked oblivious to the hive of activity surrounding him.

As chairs were arranged around tables, arrival cocktails were positioned on silver trays and members of the Abyssinian Baptist Choir warmed up their vocal chords from their perch on the Beaux Arts building’s double staircase, Monn, the party’s orchestrator and guest of honor, was as usual calm. With literally a 30-minute window to work with from the library’s closing to the party’s start, he said, “Actually, there’s never this amount of activity this close to it. All of this went up in a matter of moments.”

The gathering was a salute to his first book, “The Art of Celebrating,” which Monn said he had put off writing. “I was afraid it wouldn’t be perfect, and I didn’t want it to be a party book. I wanted it to be about the art. It’s always been the art.”

His well-wishers included Gayle King, Josie Natori, Simon Doonan, Martha Stewart, Ray Kelly, Linda Fargo and Ann-Dexter Jones. While Jennifer Creel, Helen Lee Schifter and Dori Cooperman admired the Monet-inspired decor in the Astor Hall, Natori wrangled Monn for a photo with her husband and son. The designer said, “His love for beauty and perfection is like nothing else. He’s so authentic with the purity of his vision and his taste. It is beyond description. I feel very privileged to have him in my life. He’s very unique and so genuine.”

Gayfryd Steinberg, Alex Papachristidis and Heidi McWilliams also turned up. Slowed down by a medical boot, Cece Kieselstein-Cord gingerly made her way up the marble steps to congratulate Monn. Asked for her secret to a good party, she said, “David Monn — end of story, start-to-finish.”

Recalling his first event at the NYPL, the 2003 Literary Lions gala, Monn said, “I had no idea what I was really doing. I told my friend Gayfryd Steinberg, ‘I’m going to fill the whole room with pear branches, which at that time of year were this beautiful chocolatey red brown. A 52-foot tractor-trailer truck pulled up and for two days we installed all these branches. This sounds pretty silly, but we were real new — but we forgot that we would have to take it down and get rid of it. At two in the morning, we were faced with, ‘Oh wow, what are we going to do with all these branches?’ We called in a lot of friends and favors, and all the Glorious Food waiters stayed to help us.”

Fittingly, Monn was the ringleader of another milestone at the NYPL — its centennial gala in 2011. His run-of-show included performances by the New York City Gay Men’s Chorus, the Abbysinian Baptist Choir and PS22 school children each selected because they would not have been allowed to 100 years ago. Barbra Walters emceed and Toni Morrison penned a missive. “I wanted to show that the library, I believe, in its foundation is the cornerstone of democracy. It is the freedom and transformation of information for all. That really was one of the most powerful moments, because the story was true. It showed what freedom and democracy and freedom of information can do.”

Originally planned for October, Monn said a close friend asked to change the event to Monday night. “Without question, it is more powerful [being back at the library] today than it would have been a month ago,” he said. “Even more incredible is lighting is one of the key ingredients to everything I do. I live by lighting, natural lighting and incandescent lighting What’s amazing is tonight is the full supermoon.”

One of Monn’s fans, Jamee Gregory, doesn’t expect the post-election turmoil to dim the art of entertaining. “I hope there will be more given the situation. We need to raise a glass and celebrate, be optimistic and try to pull together. The way people feel now they need a private party — to vent,” she said.