Justin Timberlake and Mila Kunis walked the red carpet, and did little else, at the New York premiere of “Friends With Benefits” on Monday. 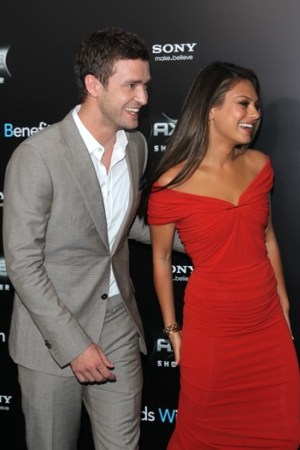 It was fitting that Axe, maker of men’s aerosol fragrances, was a sponsor of Monday night’s screening of “Friends With Benefits,” as the red carpet outside Manhattan’s Ziegfeld Theatre was one of the sweatiest in recent history. Sweltering heat and hordes of photographers provided a locker-room-style setting for press and attendees alike, most of whom would have probably benefited from some body spray after the two hours of arrivals ended. The film’s director, Will Gluck, fielded questions about the task of making two toothsome stars (Mila Kunis and Justin Timberlake, who mugged for photographers behind him) sympathetic to regular moviegoers as unlucky in love.

“Just because you’re pretty doesn’t mean your life is awesome,” Gluck offered. “Also, there’s a difference between being able to get a date and being in love.”

Elsewhere on the carpet, swimsuit model Julie Henderson considered if she’d ever had a “friends with benefits”-style arrangement.

“I…in the sense of the film? I don’t think I should answer that,” the Cavalli-clad Henderson said with a smile. If she did, would she want it to be Timberlake? “Oh man, I don’t think so.…”

Emmanuelle Chriqui chatted about her collaboration with Kate Bosworth’s company, JewelMint. Proceeds from the sales of the collection she curates go toward the charity Raise Hope for Congo.

“It’s the worst place in the world to be a woman right now,” Chriqui said, as her voice dropped an octave from her previous chat about the upcoming “Entourage” premiere. “It’s really awful.” Switching gears a bit, WWD asked what she made of “friends with benefits”-style arrangements.

“Justin [Timberlake]’s a friend of mine,” Chriqui said, shrugging off the “benefits” part of the equation. “I mean, several people in this movie are my friends.”

Emma Roberts, Patricia Clarkson, Rose Byrne, Michael Bolton and Jenna Elfman were all at the screening, and were later joined at the Top of the Standard for the after party by Courtney Love, Liv Tyler, Zoë Kravitz and Russell Simmons. Kunis wore a tight red Lanvin dress and the watchful gaze of an exceptionally beefy bodyguard, who dissuaded revelers from speaking with her.

“She doesn’t want to talk,” the guard explained, “to anybody. ”

“We wanted her to be a real flesh and blood…head case,” Keith Merryman, who wrote the film with David Newman, offered of Kunis’ role. “We wanted this to be the antiromantic movie, for Mila and Justin to embody this generation. Justin’s this huge superstar, but he’s like every guy.”

On Monday night, though, Timberlake didn’t particularly seem to want to be with anybody. Visibly pained, the singer-turned-actor had forced a mile-wide grin for the press on the red carpet.