Burberry and W magazine got in on the action on Thursday night while Bergdorf Goodman and Dries Van Noten celebrated on Friday. 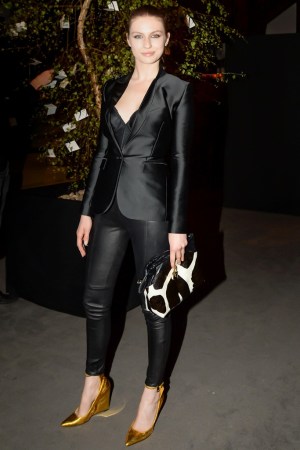 The Frieze Art Fair, which for a second straight year set up shop on New York’s Randall’s Island, gave those scenesters with even the slightest connection to the art world (fashion seemingly foremost) reason enough for a party over the weekend. Burberry and W magazine got in on the action on Thursday night with a dinner at the Park Avenue Armory for Hans-Ulrich Obrist’s “do it: the compendium,” copublished by Independent Curators International and Distributed Art Publishers. The book compiles works in Obrist’s long-running project that solicits instructional “scores” for on-the-spot art. Yoko Ono’s 1996 “Wish Piece,” which asks guests to hang wishes from a tree, had been recreated for the party. Pharrell Williams and girlfriend Helen Lasichanh were eagerly stringing theirs up. Tali Lennox declined to say what hers was. Israeli artist Uri Aran whose contribution to “do it” was the instruction to “doodle” and a page to do so, presided at a blank white backdrop where staffers were handing out Sharpies.

The party had been on for a while and the graffiti was still tame. Aran seemed dismayed. “I was just talking to my dealer, and we were saying that someone should…,” the artist said when asked why no one had worked blue. About 15 minutes later, just before the call for dinner, Tracey Emin stepped up and sketched out a nude figure with a hand in its lap.

On Friday night, Bergdorf Goodman and Dries Van Noten celebrated Frieze and a wholly different sort of art instruction manual, “Collecting Art for Love, Money and More” by the art advisers Ethan Wagner and Thea Westreich Wagner, published by Phaidon Press. Guests, who included Christopher Wool, Elizabeth Peyton, Nan Goldin, Lawrence Weiner and Maria Cornejo, sipped cocktails on the third floor of Bergdorf’s men’s store before settling into a long banquette table for dinner. “For me, I like to see things; I like to meet people. That for me is the most important thing,” Van Noten said when asked about fashion’s always increasing role on the periphery of events like Frieze. “It’s not really that I follow everything of contemporary art. It has to speak to me and that’s the most important thing.”

At the fair itself, the tent under which about 180 galleries displayed their artists’ work provided an expansive walkabout through the contemporary art market; an asteroid belt’s worth of attendee street style to navigate, and the occasional notable collector to pass by. James Franco, Emilia Clarke, Valentino, Michael Stipe and John McEnroe were all among the crowd at various points over the weekend.

RELATED STORY: They Are Wearing at Frieze New York >>