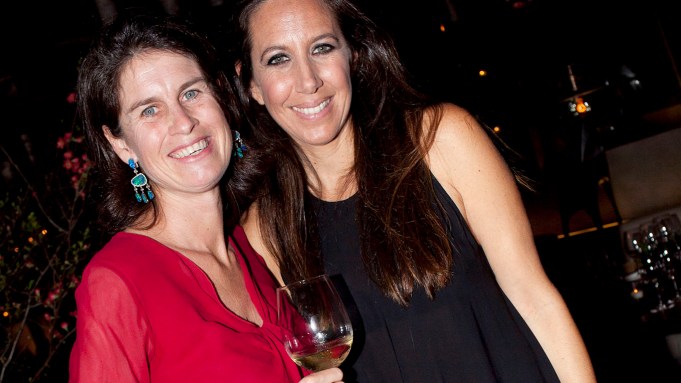 NEW YORK — Unseasonably balmy temperatures on Wednesday evening sparked a mood of celebration throughout the city with spirits particularly high at TriBeCa eatery Tutto Il Giorno as owners Gabby Karan de Felice and husband Gianpaolo de Felice raised a glass in celebration of winemaker Alessia Antinori, who was in town from Italy.

The private dinner, cohosted by Daniel Benedict and Andrew Saffir of the Cinema Society, celebrated Antinori’s family business, which has been continually operating in Tuscany since the 14th century.

“Isn’t it incredible?” remarked Christie Brinkley, sipping a glass of white. The 64-year-old model was awed by the longevity of the brand, particularly having gone into the wine business herself in October 2016 with the launch of her Prosecco label, Bellissima.

Antinori floated around the room clinking glasses with guests including Bridget Moynahan, Gina Gershon, Jill Kargman, Lizzie Tisch, Emanuelle and Joanna Della Valle, Sandra Brant, Cuba Gooding Jr., Joshua Bell and Zani Gugelmann. “It’s a huge responsibility and a big challenge to maintain [the family business],” she explained. “We have in our DNA a tradition and history and obsession with wine.”

Not so for Julianna Margulies, whose knowledge of varietals comes solely from husband Keith Lieberthal, a passionate oenophile. “Our son should be called ‘Châteauneuf-du-Pape,’” she said. The couple’s interest in wine developed after purchasing a country house in New York’s Hudson Valley that came with an “old school” wine cellar. “I’ve said to him please tell me which wines are the cheapest so if I’m up there alone with my girlfriends I don’t make the mistake [of drinking a prized bottle].”

Donna Karan stopped by shortly, but while others sat for an Italian family-style dinner, the designer was headed for an even more authentic experience as she dashed off to a red-eye flight bound for Italy to work on her Urban Zen collection.

“I drink a lot of wine,” exclaimed Karan’s daughter Gabby de Felice. “They say it’s good for your heart, but I think when you’re married to an Italian you have a lot of wine in your life. When you’re American you just whine a lot.”

Katie Couric arrived fresh-faced, despite having recently returned from her coverage of the Winter Olympics in Pyeongchang, South Korea. “I’m still so jet lagged,” she said. “I’m waking up at superweird hours.” Couric, like the rest of us, turns to social media as a distraction in those restless early-morning hours.

“I went on Twitter the other day at 3:50 a.m. asking if anybody had advice for jet lag,” she continued. “Suddenly, I got in a conversation with Chrissy Teigen, Ana Gasteyer and Valerie Bertinelli, who were all awake. We decided we were going to have a slumber party or do a really, really, really early morning TV show.”

The former “Today” host admitted she doesn’t miss the show’s early morning call time, but rather misses the “connection with the audience where we could share these communal experiences together.”

Couric, who in a viral “Today” clip from 1994 asked an off-camera producer “Can you explain what Internet is?” now embraces her digital presence. “Sometimes I feel like I overdo it, but I do feel like Instagram has enabled me to have that connection [with people] again. Luckily I’ve gotten a little more social media-savvy in my old age.”