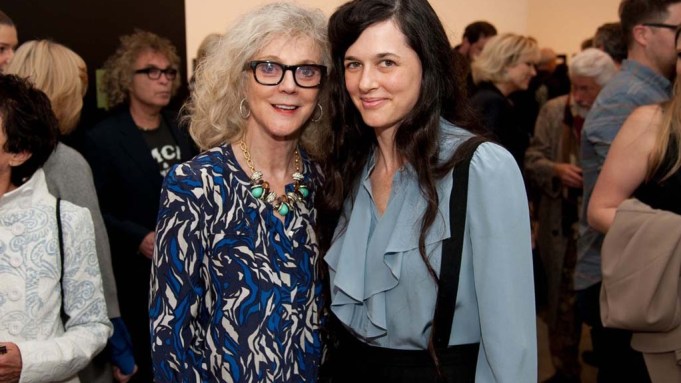 Larry Gagosian stages an opening at his Beverly Hills outpost every year during the week of the Academy Awards. This year, the tradition drew more star power than usual because it was the debut of photographer Taryn Simon, whose husband happens to be Jake Paltrow, himself a filmmaker and Gwyneth’s brother.
Before the gallery opened, a line of expectant guests snaked down the block.

Paltrow was there herself along with her mother, Blythe Danner, but her back-door entrance was as swift as her exit (Danner stayed from start to finish). Also in the crowd was Oscar winner Adrien Brody and a current nominee — Jared Leto, who came with Terry Richardson. Others in attendance included: Elle Fanning, Cameron Diaz, Liz Goldwyn, Henry Winkler, and annual guest John Waters, who made his own artistic statement in a bold, graphic Issey Miyake suit.

“I love Taryn so much, and Jake invited me this evening,” said Fanning, who starred in Paltrow’s directorial debut “Young Ones,” which screened at the Sundance Film Festival.

Leto, in a worn Burberry coat he called “my old, comfortable go-to cozy jacket,” confessed he was most looking forward to finding some time for his family amid all the hubbub. “I’m bringing my mother and my brother to the Independent Spirit Awards and the Oscars.”

Titled “Birds of the West Indies” after the seminal taxonomy by ornithologist James Bond, whose name inspired Ian Fleming’s famous spy, Simon’s show is a two-part exhibition chronicling the women, weapons and cars depicted in the Bond movie franchise, in addition to all the birds that appear in all 24 films.

The exhibit wasn’t Simon’s only creation for the occasion. The press-shy photographer turned heads in a top and skirt that she sewed herself, a skill she said she picked up from her mother and grandmother.