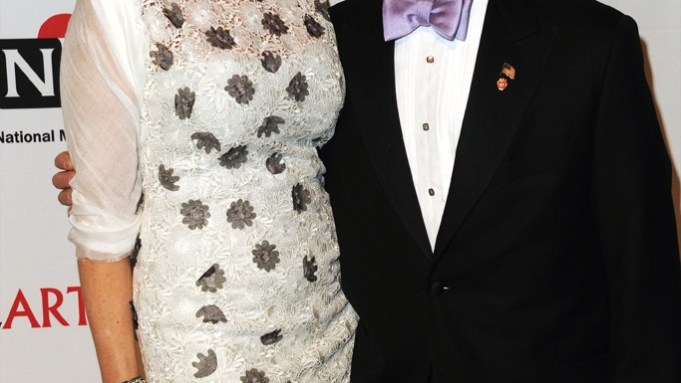 Marfan syndrome can manifest itself in many ways, or in none at all. In fact, half the people who have the connective tissue disorder —that can lead to death without proper diagnosis and treatment — have no idea they’re afflicted.

That was the overriding message at the Heartworks gala at Cipriani 42nd Street Thursday night. The annual dinner raises awareness and funds for the National Marfan Foundation, an organization that works with patients and their families to navigate the health issues associated with the disease.

Karen Murray, president of VF Corp.’s Sportswear coalition, once again served as corporate host for the evening, which raised just over $1 million for the cause. Murray, whose son Michael has Marfan’s, spoke of the foundation’s family conferences that help families deal with the medical and psychological issues related to the disease. “What we do here is help people cope,” she said.

Honorees for the evening were Amy Avitabile and her husband Scott, whose brother has Marfan’s, as well as Dr. Lars Svensson of the Cleveland Clinic. One of the more touching parts of the evening was the introduction of the Lermans, a Chappaqua, N.Y., family whose youngest daughter, Sydney, 10, has a severe case of Marfan’s. Sydney had a heart transplant as an infant and is working hard to try to live a normal life. She took to the microphone to say that being involved with the National Marfan Foundation was “cool,” because “you’re with other people like you.”

Mayor Michael Bloomberg, sporting a large lavender bow tie, has been involved with the gala since 2002. “We’re all committed to winning the fight against Marfan’s,” he said, adding that more needs to be done to “raise awareness so doctors can diagnose early and families can recognize the signs.” Breaking into Spanish, he said the next big push was to raise visibility among Hispanic families, although the disease “does not know ethnicity or language.”

The entertainment for the evening was Tamara Tunie, who plays the medical examiner Melinda Warner on NBC’s “Law & Order: Special Victims Unit,” who wowed the crowd with Broadway show tunes.