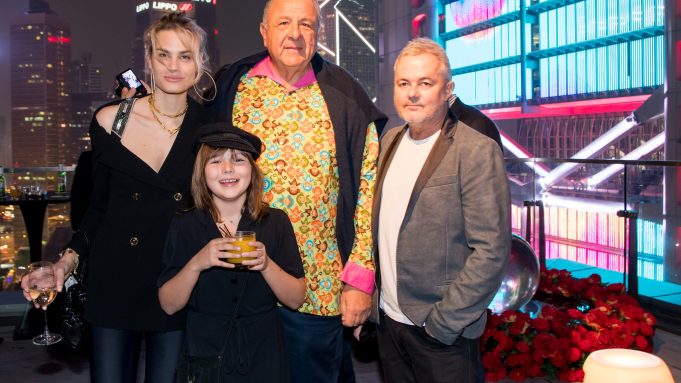 The bon vivant was mingling outside on the terrace at Sevva, just arrived from Panama to host a dinner with Galerie Gmurzynska, but was facing the ultimate Hong Kong problem: he needed a good tailor.

In fact, Pigozzi up until recently had an excellent outfitter. But as he explained: “My shirtmaker has disappeared. Mr. David, who made this shirt,” pointing to the monkey-print yellow shirt he’d donned for the night.

“I sent him some cloth but he has disappeared and nobody can find him. He was in the Mandarin hotel. They don’t know [where he’s gone]. I asked all the other shops and they don’t know. He was very old, and he disappeared,” he said.

At the very least, Pigozzi was in the possession of excellent shoes. Silas Chou, the textiles tycoon and investor behind businesses like Tommy Hilfiger, was ebullient on arrival. Greeting Pigozzi, the two immediately launched into high praise for the Silicon Valley sneakers, All Birds.

“Better than anything! The best fashion brand today is All Birds,” Chou said, before whipping out his phone to show photos of his youngest daughter Vivian’s recent wedding.

The two joined Isabelle Bscher, the third-generation to lead the influential contemporary art player, as well as guests including Diana Picasso, events extraordinaire Alexandre de Betak, filmmaker Fernando Sulichin, British music producer Nellee Hooper and his young daughter, Macy, at the dinner table, which had been decorated with dozens of stuffed toy dogs.

Asia, of course, is celebrating the year of the dog, so it was only fitting that Galerie Gmurzynska wanted to bring his black and white photographic series of Pigozzi’s pets to the Art Basel fair here. It looks like Bscher will be spending more time States-side though, as the Zurich-based gallery will soon be opening an outpost in New York in May.

But as for Pigozzi’s next project, he’s still focused on the animal world. Cutter ants have caught his recent fascination.

“They can carry seven times their weight. I saw them and I’m making this incredible film with them,” he said. The piece should be ready in the next two to three months, although Pigozzi made it clear his inspirations came from what was in his vicinity. “Some people climb on top of mountains [to find inspiration], I don’t.”