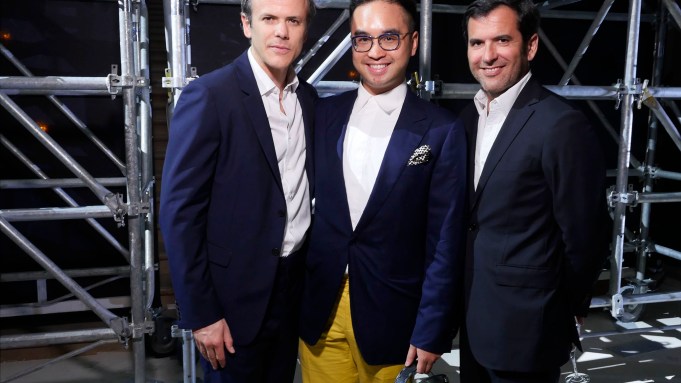 The forthcoming Galeries Lafayette on the Champs-Élysées isn’t yet ready for customers. It won’t open until March 2019 and is still a full-on, dusty construction site.

Guests including Jonathan Anderson, Pierre-Yves Roussel and Adrian Cheng were presented monogrammed hardhats upon entry, and a gang of burly construction workers in boiler suits wheeled away scaffolding to reveal a staircase inviting all to be seated.

Didier Krzentowski of Galerie Kreo and Berluti’s Isabella Capece-Galeota were among those who set about blowing out scored of candles adding heat to the room. Krzentowski was buzzing about the Bourrelec brothers sculptures commissioned by the City of Paris.

Art guru Tatiana de Pahlen tucked into tins of delicacies prepared by Alain Ducasse and recounted her latest project: a new gallery space in Gstaad that will be taken over by a rotating list of blue-chip galleries. “Gstaad is only open in the summer and winter and the hotels even close when the town empties,” she lamented.

Guilllaume Houzé noted the retailer’s founder tried to secure the location some 90 years ago — known to most in recent years as the site of a Virgin Megastore.

At 6,500 square meters [almost 70,000 square feet], it will be the largest store on the Champs-Élysées, but a small Galeries Lafayette.

Nicolas Houzé describes it as “a laboratory for scouting new brands and trends.”

But the after-dinner entertainment was pure retro. The crowd went wild when French singer Catherine Ringer, co-founder of the pop-rock group Les Rita Mitsouko, took to the stage.