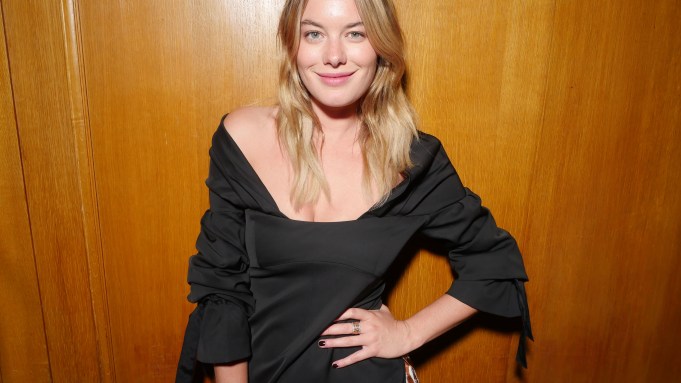 Perrotin is to move his Madison Avenue gallery to a Lower East Side four-story, 24,755-square-foot space on Orchard Street, which has previously been home to the Beckenstein fabric factory. The basement and ground floor are due to open in April. “We’ll open with an exhibit of a young Columbia artist Iván Argote,” he said. For his part, Mennour, who has three locations in Paris, is to open his first gallery in London on Tuesday, below the Claridge’s hotel while Veilhan is to represent France at the upcoming Venice Biennale, kicking off on May 6 for six months. “It’s once in a lifetime,” the artist said.

“We’re celebrating creation,” said Guillaume Houzé, director of patronage and image at Galeries Lafayette, which is building a home in the Marais district for its art foundation, designed by Rem Koolhaas. It’s slated to open to the public at the end of 2017.

Houzé, who was hosting the dinner with his brother Nicolas Houzé, chief executive officer of Galeries Lafayette Groupe’s department store division, was table-hopping and helping Gabriel-Kane Day-Lewis find a seat. “I don’t mind. I can go back and forth [between tables]. I can do 15 minutes here, 15 minutes there,” said Day-Lewis, who appeared in the recent Galeries Lafayette campaign.

Rowe, who’s also a Galeries Lafayette face, is to appear in “Rock ‘n’ Roll” a film directed by Guillaume Canet, starring Canet, Marion Cotillard and Yvan Attal. The France-born, Los Angeles-based model and actress said she planned to attend Dior show, “and then I’ll spend some time with my family, with my younger sister.”

“It’s always good atmosphere here,” Kane said. “We love the baked potato with caviar, don’t we? I have it may be three times a year. It is always a treat.”

“Do you ever watch ‘River Monsters?'” The designer continued, while looking at the sturgeon-shaped sculpture hanging on Caviar Kaspia’s ceiling. “There’s a fishing show in the U.K. It’s terrifying.”

“Oh my god, crazy monsters that you should never see in life,” confirmed Patrick Cox.

“I always do the same things when I am in Paris. I go to Vanves [flea market], Comptoir de l’Image, the Arts Décoratifs museum….I love coming to Paris;  it’s a joy,” said Moralioglu, who recently opened a section at the Galeries Lafayette. “It’s exciting. It’s an institution,” he said.

“I am fortunate. I have my husband so I collect [art],” said Bruno who’s married to the galerist Elbaz. “We’re passionate.”

“I’m her inspiration,” he teased.