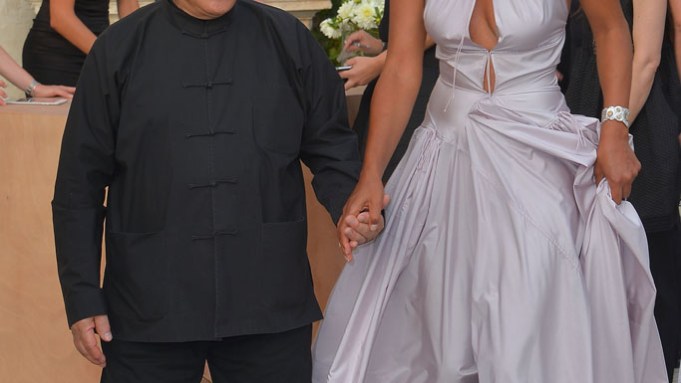 Rome remained the center of fashion attention on Friday night as designers, celebrities and more turned out to celebrate Azzedine Alaïa and his exhibit “Couture/Sculpture: Azzedine Alaïa in the History of Fashion” at the Galleria Borghese.

Stephen Jones, wearing a black pinstriped suit by Stephen Linard, highlighted the contrast between Alaïa’s “modernist and voluptuous designs” and the classic masterpieces on display at the museum.

“He is the real deal, the ultimate couturier, how he loves and sculpts the human body and the dresses for women from any part of the globe,” agreed Rula Jebreal, noting that the dress she wore to marry Arthur Altschul Jr. is shown at the museum.

Maria Grazia Chiuri, who attended the vernissage cocktail and dinner, was still recovering from the emotions of that other big fashion event in the Italian capital: Valentino’s couture show the previous evening and 12 interviews that day. “I have never seen our staff and the seamstresses so moved by the show,” said Chiuri, speaking of the decision to hold the event in Rome. The brand’s cocreative director Pierpaolo Piccioli arrived a few minutes later with Alber Elbaz, who posed cheerfully for the photographers. “You have to,” he responded, asked about his easy attitude toward the photo op. Of Alaïa’s style, he said: “The one and only.”

Carla Sozzani, a longtime friend of Alaïa’s who later led him in a brief dance during an impromptu performance by Vittorio Grigolo to the sound of “Volare” after dinner and a short castanet show, said it was especially “emotional when we saw all the looks uncovered at the same time” at the museum. Sozzani, who was also joined by her sister Franca, said what she found most inspiring is how Alaïa “perfects his own work, he is not looking for new trends but at always improving his own designs.”

In Rome after the Paris haute couture shows, Michelle Rodriguez said she had to “fly back home to take care of business,” but was planning to return to Europe for her summer holidays. “Saint-Tropez, Ibiza, go with the kids that make some noise. There’s time to go quiet in winter.”

Dinner — lobster and sea bass — was served in the gardens of the Galleria Borghese with classic statues and the central fountain strategically lit, creating the perfect backdrop for a Roman outdoors feast. The weather contributed, as Rome’s classic Ponentino evening breeze cooled the hot July temperatures.