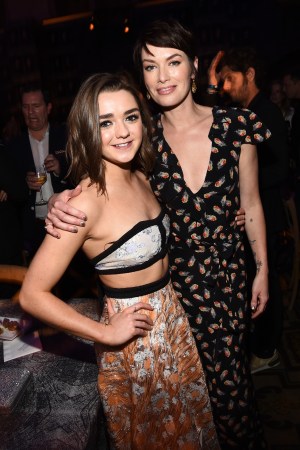 “Is Jon Snow actually dead?” seemed to be the question on everyone’s mind at the season six premiere of “Game of Thrones” on Sunday night at Hollywood’s TCL Theatre. While Kit Harington, the actor who plays him, was notably absent from the event, his presence was felt as the cast — including Emilia Clarke, Lena Headey, Peter Dinklage, Sophie Turner and Maisie Williams — walked the red carpet and provided cryptic answers about the season to come.

Even actress Amanda Peet, who is married to show cocreator David Benioff, was in the dark. “I’m cautiously excited because there are certain people who I want to see alive,” she said, insisting that she and her husband don’t talk shop. “I haven’t gotten ahead of the show, so I made a decision in the last year or two that I was going to stay back and enjoy it with everybody else.”

Clarke discussed the evolution of Daenerys Targaryen (aka, “The Mother of Dragons”). “We left her in a tight spot, but she’s kind of a badass, so you never need to really worry,” she said, before teasing that the season begins with her character “literally, physically and metaphorically lost.” As for the whereabouts of those dragons, Clarke laughed, “It’s a good question. They’re always around, ‘like love is in the air, dragons are in the air,’ you know what I mean?”

Maisie Williams said her character Arya Stark will do a 180-degree turn from her sweet tomboy-turned-assassin. “This is the first time that we’ve seen her as an underdog,” she said. “People think that she’s their favorite character and we’re now going to see if people stick by her — even when she’s at her lowest point.” As for Jon Snow, “lots of people have asked and lots of people have been very disappointed by my answer,” she said — at least keeping up the charade.

Nathalie Emmanuel, who plays Missandei, insisted she doesn’t have any special ritual when reading the script. “I don’t flick through ahead and see whether I’m, like, alive at the end or anything like that,” she said. “I just like to read it and experience it as the viewer will do when it airs on TV.”

There were so many guests in attendance that HBO had to book a second theater nearby for the overflow and, while the premiere obviously addresses last season’s cliffhanger, journalists in attendance were asked not to leak or review the episode in coverage. Naturally, attendees brimmed with insider knowledge as they walked down the street to the premiere’s after party at The Roosevelt Hotel. Per usual, HBO pulled out all the stops for the affair, which took over two full floors of the hotel. The space featured wintry white decor with torches at every corner, a sword throne front and center in one room, and an animated fire in another. Like the season’s promotional billboards, a wall with faces stared out from every corner of the dining room. There were reserved tables for some and a full buffet for all — including Faye Dunaway, Queen Latifah, Elon Musk, Alex Karpovsky, Thomas Middleditch, Lisa Bonet and Shiva Rose.

Clarke chatted up Dunaway while Williams hammed it up in the themed photo booth with friends. Other guests enjoyed henna tattoos, silkscreen-printed tote bags, and personalized psychic readings from oracles dressed in “GoT” appropriate garb. By the night’s end, plot twists were the last thing on anyone’s mind. Even so, of Jon Snow’s future, which will be addressed when the show returns on April 24, Nikolaj Coster-Waldau shrugged, “Nobody really wants to know. That’s the funny thing. You’ll ask the question and then you start thinking, ‘Actually, don’t tell me.’”