Gareth Pugh Lures the Goths Into the Sun

The designer and MAC Cosmetics celebrated their upcoming collaboration with drinks at sunset on Wednesday night. 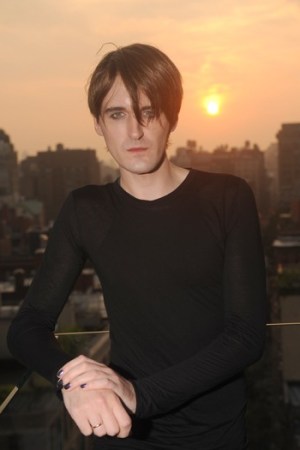 Gareth Pugh’s Gothic approach to design doesn’t exactly scream al fresco summer cocktail hour, but that didn’t stop the designer and MAC Cosmetics from hosting a small party to celebrate their upcoming makeup line on Wednesday night. Guests at the bash, held in the New Museum’s seventh-floor Sky Room and its narrow patio, tended toward the black end of the sartorial spectrum.

As the sun went down, Pugh stood on the west end of the space’s balcony dressed, natch, in all black, seeming not to mind the severe New York temperatures.

“I will enjoy the heat while I’m here, let’s just say that,” he said, referencing the unseasonable chill in his native London this week. Given the collaboration in the works, WWD asked if Pugh had sampled the fruits. He showed off his fingernails, which were painted in an iridescent shade that moved between green and purple.

“I haven’t done it for a while,” he said of his nail polish. “Now and again I like to treat myself. To be honest I didn’t have a spare hour to sit in a nail bar and have my nails done, that was kind of the reason.…But I thought I would find myself an hour yesterday.”