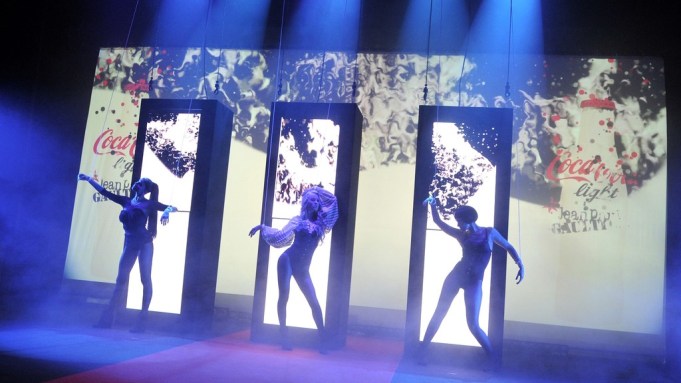 PARIS — Jean Paul Gaultier stepped onto the stage of Paris nightclub Le Trianon Thursday night wearing a black bobbed wig. He then tossed it into the crowd, revealing his familiar shock of spiky hair — and the crowd went wild. “Have fun,” he declared through the microphone, as hundreds of white balloons tumbled from the balconies onto the dance floor.

The sprawling party to celebrate Gaultier’s role as creative director of Diet Coke in Europe featured a thumping performance by Canadian electronic outfit Dragonette, a tattoo station and a photo booth where guests could mimic a cheeky ad campaign for the drinks by photographer Stephane Sednaoui. In it, the designer’s face is superimposed over female models.

Moments earlier, Gaultier had revealed his first bottle designs: one dressed in his signature sailor stripes, another in lacy, racy lingerie.

“They wanted me to look like the girl on the bottle,” Gemma Arterton said of her outfit — a corset that cinched her waist and had a push-up effect.

The busy English actress just wrapped a trio of movies: The forthcoming vampire flick, “Byzantium, “Song for Marion” opposite Vanessa Redgrave — “Harvey Weinstein just bought it,” she noted — and “Hansel and Gretel: Witch Hunters,” in which she plays a grown-up Gretel who has become a bounty hunter. “It’s very violent, but fun,” she enthused of the latter film.

Crowds and cameras swarmed around Gaultier, clearing only for the arrival of the singer Arielle Dombasle, poured into a printed gown.

Dombasle said she’s working on a new album, and noted she is not much for soda pop. “I drink tea,” she said, “sometimes with a little milk.”

Gaultier’s involvement with Coca-Cola is to continue throughout 2012, and he is to play a role in ad campaigns, online content and retail concepts. A third limited edition bottle — featuring a tattoo motif — is to be launched this summer.