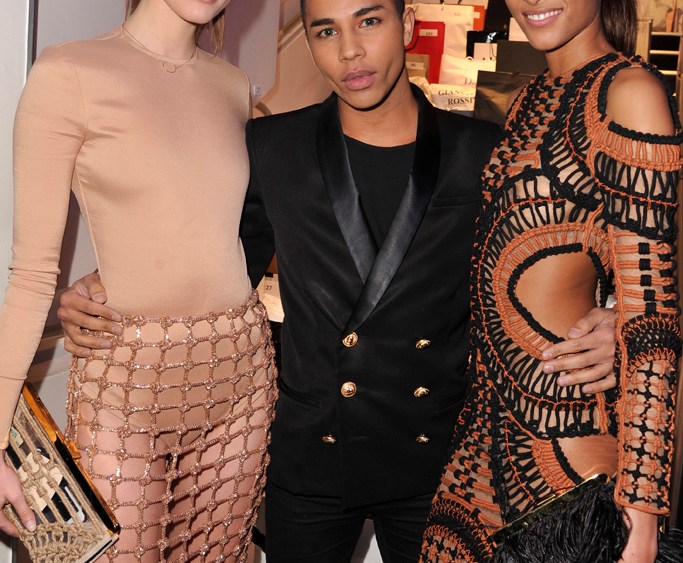 Typical at fashion parties, everyone converged immediately on the designated smoking area.

“After the Paris attacks, I want to show that Paris’ lights aren’t going to turn off, that Paris’ splendor isn’t going to go away; that it’s a city of inspiration,” Rousteing said, noting he would jet off to Dubai for the holidays as usual.

Emanuele Filiberto di Savoia is heading to Pitti Uomo in January to unveil a line of pajamas in cotton and cashmere, adding to his T-shirt brand. He’s also producing a 90-minute documentary set for release in theaters on Federico Fellini. “We are very fortunate. The likes of Roman Polanski, Wes Anderson, Woody Allen, Martin Scorsese have participated,” he said.

Jean Paul Gaultier, who heads the jury for the Miss France 2016 pageant, is heading to Lille for Saturday’s televised crowning, and already has a favorite contestant — and competition. “I like when they are in their folkloric outfits,” said the madcap couturier, whose swan song ready-to-wear was a mock beauty contest and whose Breton-inspired fall couture collection was a wink to the 2013 movie “On My Way,” in which Catherine Deneuve portrayed an aging ex-Miss Brittany.

Stéphanie Sokolinski, better known by her stage name Soko, and actor Niels Schneider should compare notes: Both are making films about dancers, and had to learn fast how to make all the right moves.

“The walk of shame every day,” said Schneider, who is heading to Moscow for the last scenes of “Polina,” a movie about a woman joining the Bolshoi Ballet.

Soko plays Loïe Fuller, the American dancer who was the toast of the Folies Bergères and twirled her heavy silk costumes under dramatic lighting.

“I got really strong,” she said. “I trained my ass off. I was doing seven hours of sports a day, swimming, dancing.”

Delphine Manivet, wearing her own design — a butter yellow dress in silk — is busy preparing her presentation for Paris couture week. “It will be very intimate; inspired by presentations of the time of Paul Poiret; models will stroll around,” she said. After opening a boutique in New York in October last year, Manivet plans to open a store in London’s Mayfair in fall 2016.

Dressed in Chanel, Anna Mouglalis said she plays a socialist leader in an upcoming series for Canal Plus, with costars Niels Arestrup and Kad Mera.

Dancer Marie-Agnès Gillot came with her dog Goldie. “I was dancing at the opera tonight. I come straight from stage. She was in my dressing room so I couldn’t let her,” she explained. The prima ballerina is next to perform pieces of Jerome Robbins and Jerôme Bel and then a Benjamin Millepied creation in February.

Djian worked the crowd, while journalist Mademoiselle Agnes took to the mic to sell raffle tickets.

“The fashion industry is extremely generous for this cause that I feel so strongly for,” Djian enthused.

Her event benefits the association A.E.M, which helps feed and send to school 2,000 children in Rwanda. It raised 300,000 euros, or $328,020 at current exchange from tables bought by fashion houses and the raffle.

Elodie Bouchez won a Stouls skirt. “I have the sense it will fit perfectly,” she enthused. The actress is to shoot next in the next film of Erick Zonca.

Models in attendance included Malgosia Bela and a six-months pregnant Saskia de Brauw, who is to present her first book called “The Accidental Fold” — an artistic collection of scans of found objects — on Jan. 28 during Paris couture week.

After dinner, the crowd danced, with Anna Cleveland and Gaultier busting a move to rock ‘n’ roll.