The actress' buzzworthy turn as a woman passing as a man in 19th century Ireland premiered in New York on Tuesday. 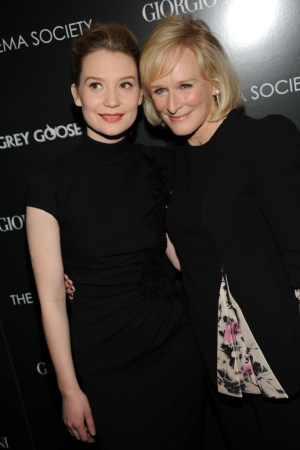 Glenn Close originally starred in a stage production of “The Singular Life of Albert Nobbs” in 1982, and has spent parts of the last 15 years trying to have the work adapted to the screen. So at the film’s New York Cinema Society premiere at the Museum of Modern Art on Tuesday, it made sense that she sounded a little satisfied.

“I believe in this story,” the actress, who also co-wrote the screenplay for title-truncated “Albert Nobbs,” said. “It’s funny, it’s heartbreaking.…It’s unexpected. Wildly unexpected. The talent that we had involved.…I’m very happy with it.”

The film takes place in 19th-century Ireland. Close plays a woman living in disguise as a man largely for economic reasons, but feeling all the expected emotional repercussions. The glitzy crowd at the showing and subsequent party at the Armani Ristorante included Lauren Bacall, Lou Reed, Patti Smith, Francesco Clemente and Debbie Harry. Close’s daughter, Annie Starke, was also on hand and had a small role in the film. The pair both wore Armani Privé.

Rose Byrne and Mia Wasikowska, who co-stars with Close, laid on a pair of black-velvet-covered chaises in the middle of the crowded restaurant.

“It was amazing to work with Glenn [Close],” Wasikowska offered. “It was a great project…and a great experience.”

Tony Danza held court at the bar and tussled affectionately with Paul Haggis, who periodically interjected with unprintable expletives. Did Danza enjoy the film?

“It was a very beautiful world [the world of the film], and Glenn was amazing in it,” Danza mused as Haggis requested a beverage. “Totally transformed. But I’m not sure, actually, that I bought her as a man…maybe she should have had a beard?”

Toward the end of the evening, Sinéad O’Connor took to the microphone for a surprise musical performance. Courtney Love headed for the exit, friend in tow.

“Where is the Monkey Bar in relation to here?” Love asked. “Let’s go.” One partygoer watched her exit and sighed, “Well, it’s over when the bald lady sings?”