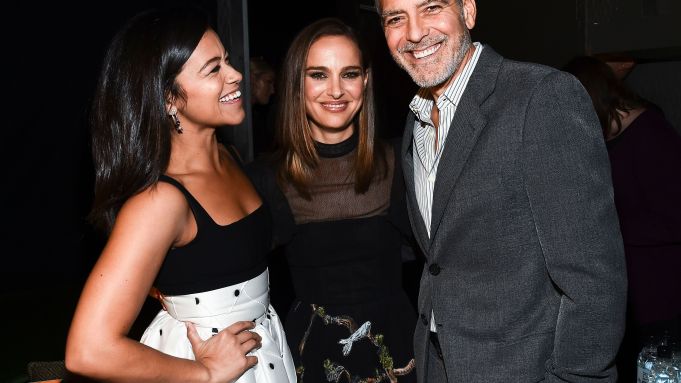 Clooney didn’t waste any time preaching to the choir – those in Hollywood who don’t support the Trump administration’s policies.

“Fear of Muslims. Fear of immigrants. Fear of minorities. Fear of strong women,” he said. “And because our government needs us to be afraid, the question is, are we really scared of all the things that actually make America great? And if the answer is yes, then we’ll have history to answer to. Because these are the ideas that will define us for generations,” he said.

“When you call an entire religion your enemy, you might very well make an enemy out of an entire religion. When you tell a whole race of people that you value them less, you can’t be surprised when they question your values. When you tell women that coming forward to testify about their abuse is a joke, don’t be shocked when they’re standing on your lawn, laughing on Nov. 7,” Clooney said.

Clooney praised Gonzalez for lobbying for more gun control regulation and for helping to drive change among the younger generation.

“She made us listen to her heart,” Clooney said. “A heart that believes that we as a country can be so much better. A heart that called for adults to act like adults so children don’t have to.”

Later on, Portman took the stage to give a fiery speech about gender parity, calling out Harvey Weinstein for trying to discredit his victims and accusers.

Portman encouraged everyone to be more supportive of one another. “The more love you give, the more love you have. And the same can be said of fire. When you light someone else’s torch with your own, you don’t lose your fire, you just make more light and more heat.”