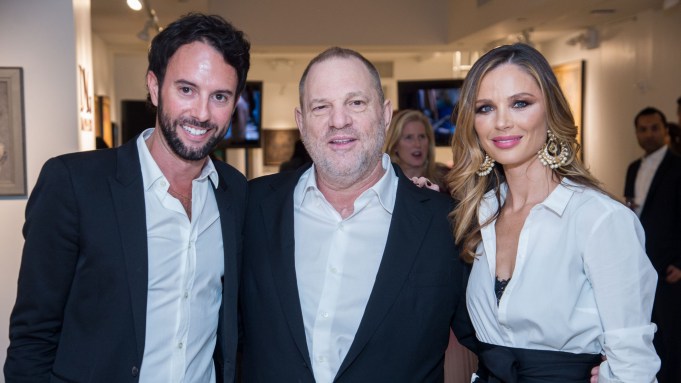 On Tuesday evening, Magic Bus was looking to pick up support at the DAG Modern gallery. The charity had stopped in the right place: Georgina Chapman had rounded up an intimate and well-heeled crowd in order to raise awareness and support.

“I’ve always had an affinity with India — my grandmother was born in India, my family was there for several generations. I’ve always felt spiritually connected,” Chapman explained. “It felt important for me to give back to those communities.”

A few weeks ago, she visited the Magic Bus community of Mankhurd in India, where she supports 2,600 youths. Headquartered in Mumbai, Magic Bus sponsors education and livelihood programs for at-risk youth in impoverished communities. The goal is to empower children to rise out of poverty through education and leadership.

“The way I can sum it up best is the girl who was showing me around, she was one of the first girls who went through Magic Bus,” Chapman recalled. “One day she said, ‘Georgina, I really need you to understand how important this is,'” she continued, explaining that the girl was the first person in her entire community to go to college; she’s now employed full time and engaged to a man of her choosing. “That is the power of Magic Bus. There’s nothing physical that I can show you, it’s just stories and anecdotal.”

Later in the evening, Chapman did just that, sharing stories and a slideshow of photos from her trip with the crowd, which included husband Harvey Weinstein, Marchesa codesigner Keren Craig, Bibhu Mohapatra, Fern Mallis and Chloe Norgaard.

“It’s a great privilege to have learned about Magic Bus through Georgina,” Craig said. “We actually decided on creating Marchesa in India, so it’s a very dear place to both of us,” she continued. “What Magic Bus does is truly incredible, the way that it teaches people within their communities to teach other people in their community. Teaching people how to help themselves, and how to really empower themselves.”

Mohapatra was already thinking of ways to further his involvement with the initiative. “I want to make sure I do my part, and someday I want to do some events in India with my crowd,” he said. “I was just there, and I have a very good group of friends who would just jump in.”

Freida Pinto Takes a Stance in “Guerrilla”
Jennifer Hudson is Nostalgic for the Nineties
Sienna Miller on Motherhood, Being ‘Shy and Weird,’ and Taking on Tennessee Williams
Gavin Rossdale on His New Clothing Line, Making Music and Being a ‘Soft Touch’ Dad
Michelle Branch: Back at Last