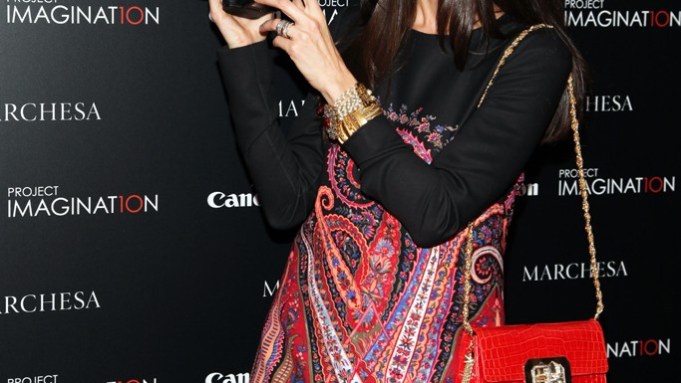 On Wednesday night at New York’s Crosby Street Hotel, Georgina Chapman explained the Oscar-pedigree-level help she had in directing her first short feature.

“I asked him a million questions and he was brilliant, he put up with all of them,” the Marchesa designer said of her husband, Harvey Weinstein.

Chapman celebrated her directorial debut, “A Dream of Flying,” made for camera maker Canon’s short film series, Project Imaginat10n, with a screening at the SoHo hotel. Overseen by Ron Howard, the project tasks various creatives — such as Eva Longoria, Jamie Foxx, James Murphy and Biz Stone — to use 10 consumer-submitted photographs for inspiration.

“There are so many parallels to making a collection when you’re making a movie, especially in terms of your team,” Chapman continued, adding that giving the actors direction on set was a “bit terrifying.”

The film, which features Dree Hemingway and a few fresh faces, follows the story of a young girl and boy who possess supernatural abilities to fly, which complicates their lifelong romance. On hand to support Chapman were Marchesa cofounder Keren Craig, Rachel Roy and a press-shy Weinstein. (Roy openly admitted to crying at the end of the sentimental film.)

“What I really liked about the film was that I actually got to fly,” said Remy Bond, the nine-year-old starlet who played the film’s protagonist at her youngest. “Well, they had me on these wires. I got to go up 20 feet in the air. It wasn’t scary. I like heights a lot.”

Actress Kathleen Chalfant, who played the protagonist at her most mature stage, was more pleased with the costumes. “I can now say that I got into a dress that also fits Georgina,” she laughed. “And clearly that has something to do with the astounding dressmaking involved.”

As guests took to their seats with popcorn, Chapman nervously took to the stage.