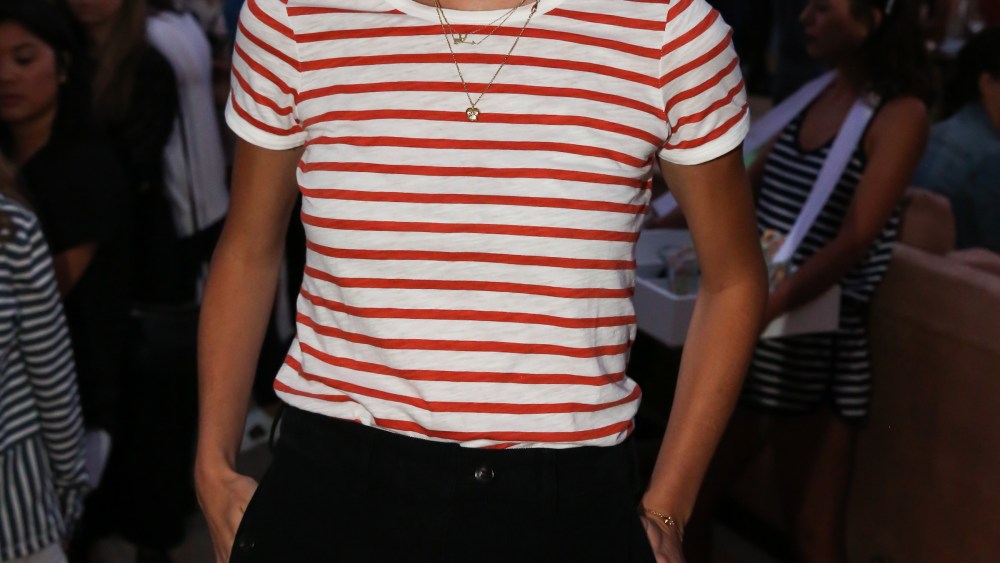 Film and fashion are second nature for Gia Coppola, so it’s surprising that the 29-year-old director, who has created shorts for Opening Ceremony, Rodarte, Diane von Furstenberg and Wren, and appeared in her share of campaigns and look books, has waited this long to do a clothing collaboration. It’s not surprising, though, that Coppola, whose indie-waif-meets-tomboy style has inspired many a designer and digital influencer, has chosen the striped cotton T has her medium.

“I like to be comfortable and wanted something my friends and I could wear every day,” she said. The Gia Coppola x Everlane collection, which debuted Wednesday on the e-tailer’s site, got its Hollywood premiere Thursday, on the Terrace at the Sunset Tower hotel. The six-piece collection, which consists of a racer-back tank, a slim T-shirt, a boatneck top, a dress, a romper and shorts, ranging from $30 to $48, was showcased on guests such as Juicy cofounder Pamela Skaist-Levy; Coppola’s mother, Jacqui Getty; actress Zoe Levin, and model friends Hope Watson, Jane Moseley and Langley Fox Hemingway.

“I’ve always wanted to do a collaboration and had met with a bunch of people over the years,” said Coppola, who paired her red and white stripe T with a vintage Western-style jean jacket and a new Gucci bag. “Everlane always felt right, because I liked their message; they have an appreciation for textiles and fabrics but an accessible price point.”

Coppola said she likes to mix up her creative endeavors. “I have to always be working — otherwise, I get sad, so I have to have my fingers in lots of different pots. Just having experience in wine-making and making movies, I can relate that sort of creative process to creating a T-shirt line.”

She’s just been tapped to direct her second feature, “The Secret Life of the Lonely Doll,” about children’s book author Dare Wright, starring Naomi Watts and Jessica Lange. But until production begins, she’s kept busy directing an impromptu music video for her friend Dev Hynes of Blood Orange, and her short film for Gucci’s pre-fall collection also debuted this month.

Of her evolution as a filmmaker, she noted, “As you grow out of adolescence and feel new feelings and experience new challenges, that’s what you incorporate into your art, because that’s what art is for. You find a way to cathartically release the internal emotions in an exterior way, whether it’s a clothing line or fashion film or movie or commercial. There is always some sort of learning process or thing that helps you grow,” she said.

Coppola says she’ll spend her summer in L.A., working, and is looking forward to attending the F–k Yeah music festival downtown. When she needs an escape, she heads north to the Coppola estate in Napa, where she has her own pinot grigio. The wine also had a starring role at the party, as the main ingredient of the Gia Sangria cocktail that guests were eagerly sipping.