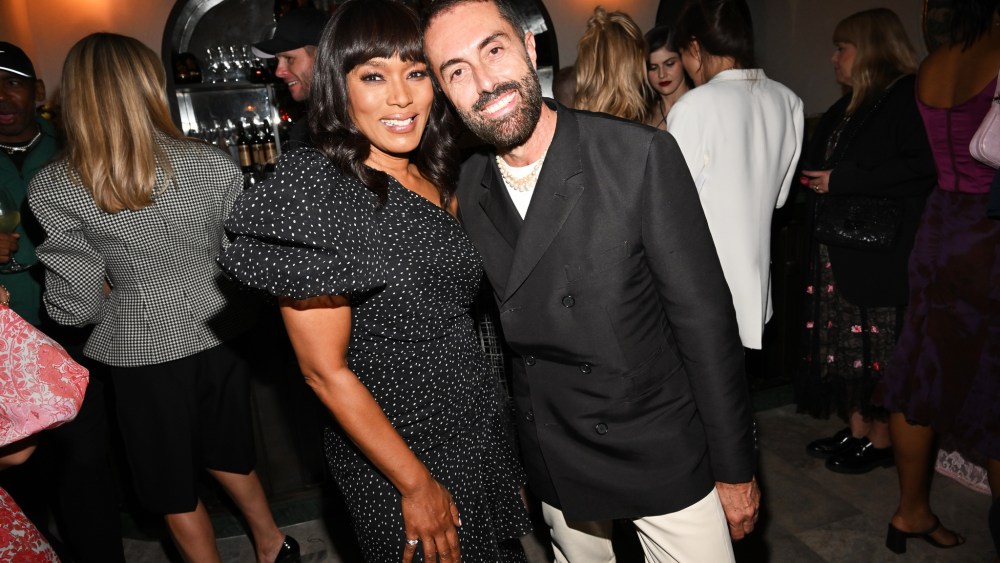 The potato has landed!

Beloved Paris fashion haunt Caviar Kaspia doesn’t officially open its doors until Thursday on Melrose Place in Los Angeles, but Giambattista Valli got a jump on the action, throwing the first party at the hotspot on Tuesday night.

“It was a way to bring Paris to L.A….and it’s a nice opportunity to say ‘hi’ to all the new friends, oh my god!” Valli said as Ciara caught his eye walking in with her new blond bob.

She was one of several stars — including Angela Bassett, Alexandra Daddario, Maria Bakalova, Micaela Jay Rodriguez and snowboarder Chloe Kim — and stylists, including Law Roach, Jason Bolden and Petra Flannery, to attend.

“Caviar is always a good idea,” said stylist Wayman Bannerman, who was there with partner Micah McDonald and their client Thuso Mbedu. The South African actress is starring alongside Viola Davis in the film “The Woman King” about the Agojie, the all-female unit of warriors who protected the African Kingdom of Dahomey in the 1800s.

“I’m grateful it’s being received as well as it has been,” said Mbedu of the film, which celebrity supporters such as Octavia Spencer, Tracee Ellis Ross, Kerry Washington, Lena Waithe, Jennifer Hudson, Gabrielle Union have been buying out entire theaters for fans to see it.

“People should know their best versions of themselves are good enough,” Mbedu said of what the film has to teach viewers. “Society will constantly tell us we’re lacking in some way, but here we have a cast of beautiful Black women who are simply existing.”

Bakalova, arriving with her stylist Jessica Paster, was happy to be comfortable in a green-and-white Valli suit — and to be home, for a minute. The Bulgarian actress was touching down in L.A. after filming two movies back-to-back, and getting ready to jet off to film a third.

“It’s what she’s supposed to be doing,” Paster said about seizing the moment. “Then you stop and have babies,” Bakalova laughed.

Wearing a pink, off-the-shoulder Valli dress and glittery platform shoes, Kiernan Shipka is off to Georgia next to film “Red One” with Dwayne “The Rock” Johnson.

Shipka hadn’t heard Johnson has been mulling a run for president sometime in the future, but was excited to talk to him about it. “I will take it,” she said. “I’ll be VP!”

The clubby-meets-Cali restaurant designed by Alexis Mabille is the latest in a line of Caviar Kaspia international locations now open in Dubai and Sao Paulo, and coming soon to New York’s Mark Hotel and London’s Mayfair.

“We started 19 years ago with Caviar Kaspia,” said Valli of his long relationship with the restaurant. “It was Giamba’s pearl necklace on the tin,” said Caviar Kaspia Group chief executive officer Ramon Mac-Crohon of one of his first co-branded products. Valli recently created blue mini handbags with the Caviar Kaspia logo, which came down his spring 2023 runway in Paris just weeks ago.

Everyone sat for dinner at a long table in the garden, and nibbled on the famed caviar baked potatoes, along with silky smoked salmon and blinis.

Ramon and his wife Anushka Mac-Crohon caught up with André Balazs, letting on that while they’ve long been inspired by his hospitality empire, they have never visited his famed Chateau Marmont in L.A. “You have to come,” Balazs said.

The Mac-Crohons are on their way to building an empire of their own.

Emboldened by their loyal clientele (Marc Jacobs and Lee Radziwell used to have post-show dinners at Caviar Kaspia in Paris, which also counted Virgil Abloh as a regular, along with Valentino, Tom Ford and many more) and the popularity of the global tour of pop-up restaurants to celebrate Kaspia’s 90th anniversary in 2017, they embarked on an expansion plan, lining up partners for new permanent locations in five key cities.

The L.A. restaurant is operated by Kith cofounder Sam Ben-Avraham and former Iro executive Rahav Zuta, has outdoor garden seating for about 70, as well as a cozy fireplace room for lighter bites, and a jewelry salon for designer Maor Cohen. The menu features all the old favorites, as well as some new ones, including the Not Your Mom’s Grilled Cheese with caviar.

The restaurant is already booked for several private events, including a Peter Dundas party in November. But Mac-Crohon wants the public to be able to come as well. “We’re creating a lifestyle brand,” he added of his strategy, including fashion collaborations. Next up: a pair of Caviar Kaspia skis for the holidays.