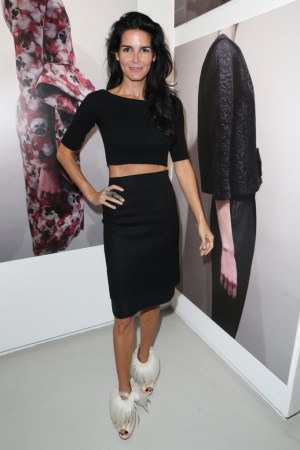 PAUSE FOR REFLECTION: Giambattista Valli celebrated the publication of a coffee-table book recounting the first eight years of his label with a signing session at the Jeu de Paume museum in Paris on Monday evening. Guests including Alber Elbaz, U.S. Ambassador Charles Rivkin and his wife Susan Tolson, Angie Harmon and Bianca Brandolini d’Adda took in exhibits including large blow-ups of photographs detailing the journey of a collection from mood board to catwalk, live footage and a portrait of Valli by Francesco Clemente.

“I wanted the spirit of the book to be without a real start and a real end,” said the designer. “I wanted it to be like a work in progress, far from auto-celebration, but to be just a way to think, a way to explain my vision, the more intimate side of my vision — to explain the method to people that don’t really know this profession.”

The tome weighs in at 400 pages, including three booklets, and will be published by Rizzoli New York in November. Featuring texts by the likes of Lee Radziwill, Diane Kruger and Pamela Golbin, it will retail for $100.

Valli recently opened a store dedicated to accessories opposite his main boutique in the Galerie de la Madeleine in Paris. “Little by little, I’m planning several openings,” he said. “I would love to [make my label] the new iconic luxury house for a new generation of customer.”

“You can see that he’s mastered all the couture techniques and craftsmanship, which is a huge achievement already, but more importantly, because of his Roman roots and his natural attitude and character, you can feel in his collection both the exuberance and the Roman attitude, the refinement of the Roman artist,” he said.

De la Bourdonnaye recommended Valli maintain the emphasis on impeccable craftsmanship and superior in-store service. “But he’s got this instinct, so I don’t think it’s going to be a problem,” he added.