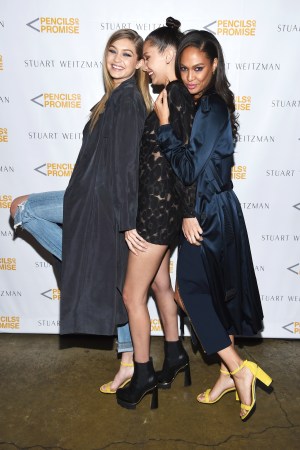 “We really believe philosophically that doing good is good business for us too because we want to give back and we want to make a difference,” Stuart Weitzman chief merchandising officer Susan Duffy explained of the event. “Stuart designed a limited-edition [shoe] in the ‘nearly nude’ yellow, which is [Pencils of Promise’s] color. One-hundred percent of the profits of that shoe go to them as well. So you can make a stylish statement and feel good about doing it.”

“Through Stuart Weitzman we’re able to build three schools, one in each country,” Natalie Ebel from Pencils of Promise said. The schools will be built in Laos, Ghana, and Guatemala, with a Weitzman team headed to Guatemala this June to start work on the school there. “Not only are they creating a product that helps to do good and enable our work, but also they’re hosting an event like this and getting our supporters together.”

Rossum might be heading on one of the school-building trips — though that was news to her. “I didn’t know that until tonight!” she said, adding that she’d been planning to travel to Nepal in May to build a school, but due to filming she’s had to cancel. “They’re going the first week of June,” she said of Pencils of Promise,“and it seemed like something to do with building a school was a bit in the zeitgeist for me, so when this event tonight came up I wanted a chance to meet some of the people.”

Smalls, Knowles, Rossum, Hadid, and Culpo all sported the signature “nearly nude” style in the limited-edition dandelion suede. “I love yellow,” Knowles said of the pair she was sporting. “You can Google ‘Solange yellow’ and a thousand things pop up.” She was also, perhaps the most so, interested in hearing about Pencils of Promise’s work in Africa. “I do a lot of education and outreach on Africa,” she said. “Most recently I just helped to build a school in Zambia. Pencils of Promise has built 300 schools, and I’ve spent time in Ghana, so it was an automatic connection.”

Over the passing of shrimp cocktail, endive salad, and plates of steak and salmon, the Hadids, Culpo, Windsor, etc. swapped names of makeup artists and made plans for Pilates dates the following morning. And before dessert was served, they headed past a rush of paparazzi into shared Ubers, party favors of sticky buns in hand. The night, it seemed, was still young.