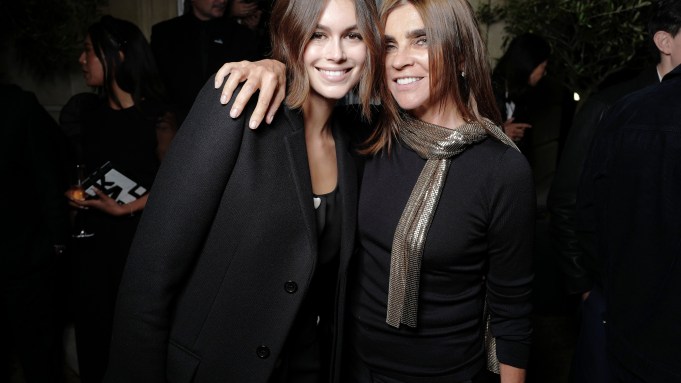 OLD FRIENDS: A black-and-white-clad crowd piled into a hôtel particulier on the Rue Saint-Guillaume on Wednesday night.

Model Eva Herzigová was spotted wearing a high-collared white shirt and dark sunglasses, a uniform favored by late fashion designer Karl Lagerfeld, in honor of the Tribute to Karl event held at the brand’s headquarters that evening.

Herzigová, alongside Cristiano Ronaldo, Helen Mirren, Cara Delevingne, Lewis Hamilton and Takashi Murakami, was one of the roster of famous names tapped by the brand’s style adviser Carine Roitfeld to take part in the charity project, each presenting a reinterpretation of Lagerfeld’s favorite item, the white shirt.

Different iterations of the garment, whether illustrated, distressed, embellished or reworked, were displayed all over the first floor of the Karl Lagerfeld headquarters, some spinning on silver carousels, others suspended from wires like artworks.

“I love the one Murakami did,” said musician and DJ Kiddy Smile, himself clad in black-and-white, a departure from his usual colorful looks. “The skulls are a beautiful symbol — for me, the message is that they accompany Karl in his journey. It’s very moving.”

The artist also lent his hand to the project — although he very nearly didn’t.

“I felt a huge pressure for some reason,” he confessed. “I was very intimidated. So I ended up simply illustrating it, blending elements from my teenage passion for graffiti and nods to patterns found on traditional garments from Cameroon, where my parents are from.”

The mood was upbeat — as the late designer would have wished. It felt like a reunion of old friends.

“I remember when I met you, you were about this high,” joked photographer Jean-Baptiste Mondino, warmly embracing model Amber Valletta.

“Carine, let me take a picture of you in front of my shirt,” cried model Gigi Hadid, who moved to position Roitfeld in front of the short-sleeve shirt she created for the project, which had “Karl Forever” written on its collar. She whipped out a disposable camera and snapped a shot. Will the pic end up on the model’s second Instagram account, @gisposable?

“Karl really nurtured creative talent,” said model Soo Joo Park, spotted in front of her shirt for the project, covered in doodles. “I used to draw little sketches for him every season. One time when we were shooting together, he showed me a page from his journal: He had kept one of my drawings. He told me I should keep going and do more. This shirt pays homage to that memory.”

Baptiste Giabiconi was feeling a whole lot of different emotions that night.

“I’m torn between the pleasure of seeing everyone again and the strong feeling that Karl isn’t here with us to celebrate,” said the model, who was discovered by Lagerfeld and walked in a number of Chanel runway shows.

“But it’s strange, I kind of have the feeling he’s going to turn up,” he murmured. “He always arrived at the last minute and kept everyone waiting. It’s as if we were all still waiting for him now. That’s the hardest part of tonight.”