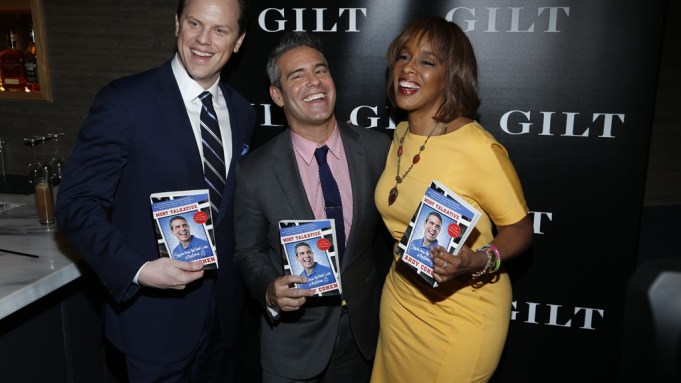 “I’m always sort of tired, I will say that,” said Andy Cohen, after audibly stifling a yawn, of his frenetic professional and social schedule that encompasses his roles as executive vice president of development and talent at the Bravo cable network, executive producer of six “Real Housewives” series, host of the “Watch What Happens Live” talk show and BFF to an expanding portfolio of bold-face pals. On Tuesday, Gilt gathered a passel of those friends for a dinner at Maysville in Chelsea to celebrate this week’s special assortment of merchandise curated by Cohen on the flash-sale site — which, in turn, was engineered to promote the paperback release of Cohen’s memoir “Most Talkative.” Tyler Thoreson, a Gilt vice president who was once cast on a Bravo pilot called “Fashionality,” helped broker the partnership.

Cohen cozied up to the bar with Gayle King and Willie Geist, surrounded by Kelly Ripa and Mark Consuelos, Sean Avery, Real Housewife Carole Radziwill, Flipping Out’s Jeff Lewis, Duckie Brown designers Steven Cox and Daniel Silver and Lucy Sykes and Euan Rellie. Not one for wallflowers, Cohen later took Radziwill, who arrived alone, by the arm and handed her off to a friend. “Can you shop her around, please,” said Cohen brightly.

The voyeuristic fun house of pop culture is the lifeblood of both Cohen and Bravo’s ascent. Cohen keeps his finger on that pulse largely online. “Twitter helps you look at what’s trending. You’re like, ‘Oh my God, everyone is looking at this picture of Blue Ivy,’” he related. “Depending on who you follow, you can get all your pop-culture news from there.”

On Cohen’s own Twitter feed is Anderson Cooper, Andrew Sullivan and the Towleroad gay news blog. “And Sandra Bernhard is always serving me something,” he added. He reads the Huffington Post several times a day and on paper he regularly consumes The New York Times, the New York Post, New York magazine, GQ, Rolling Stone and the celebrity tabloids, which he flips through on planes.

He posts enthusiastically on Twitter (1.1 million followers) and Instagram (283,000 followers), and is a new convert to Vine, but he’s resisted Pinterest and Tumblr, so far. “I feel like I’m almost at my breaking point. How much more can I give?” he asked melodramatically, before adding, “But should I be on them?”

Ripa, who met Cohen at Bryant Gumbel’s Christmas party eight or nine years ago and whose family now vacations regularly with him, pinpointed a less garrulous side of Cohen’s charms. “It’s ironic that his book is called ‘Most Talkative’ because he’s actually a really good listener,” she disclosed. “For how busy he is, he’ll remember to ask about my 15-year-old son’s math test.”