Among the celebrities who visited the new Armani Silos space were Leonardo DiCaprio, Cate Blanchett and Pierce Brosnan.

By Alessandra Turra and Luisa Zargani on April 30, 2015
View Slideshow 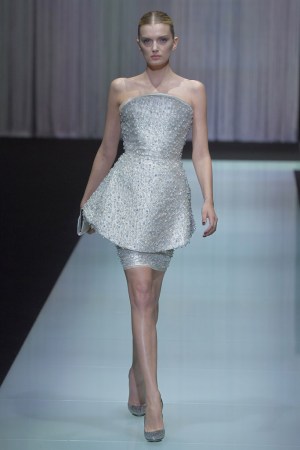 Hollywood and Giorgio Armani go a long way back and the roster of celebrities that attended the designer’s celebratory event on Thursday did not disappoint. Prime Minister Matteo Renzi also met privately with Armani and paid tribute to the designer, who was unveiling his Silos exhibition space and museum, marking four decades in business and at the same time the opening of Milan’s international Expo.

Cate Blanchett said she shared a “deep personal connection” with Armani and that she was “eternally grateful” for his support of the Australian Theater Company led by herself and her husband Andrew Upton. Looking radiant in a cream pantsuit embellished by an obi-like belt, the actress praised Armani’s “exquisite tailoring” and how he “mixes male and female” elements. “I always feel at ease and myself, even when he goes in many different directions,” she said.

Glenn Close equally trumpeted Armani’s “wonderful generosity” toward her charity, Bring Change 2 Mind, which aims to end the stigma surrounding mental illness. “I met him in the Eighties. [His was] the first piece of clothing I was ever lent, a beautiful black tunic over pajama pants. I still remember it, from back when Reagan was president,” she said with a laugh and a wave of her hand.

A tanned Leonardo DiCaprio was sporting a full beard and a ponytail, and wearing dark glasses, carefully walked around taking in several archival designs. Surrounded by massive bodyguards, he was not available for soundbites. Asked about his look, DiCaprio’s rep said it was connected to the actor’s shooting “The Revenant” directed by Alejandro González Iñárritu. Perhaps inspired by the Hollywood success of “The Great Beauty,” Oscar-winning director Paolo Sorrentino was also declining interviews.

In contrast, the effusive Lauren Hutton said she was thinking of “killing” her beauty line, before adding in mock fear that women “threaten me on the street” to keep it going. “But what you actually make is only about 5 percent, the rest is only business, and I’ve never known a thing about it.” Her next project? Going back to traveling, “having fun” again. “Traveling was my real job,” she said.

Asked about his upcoming role as the “bad guy” in “Survivor” out later this year, Pierce Brosnan graciously steered the conversation toward Armani. “I’m so proud to be here, this is his night and I adore his fashion,” the actor said.

“I come to Italy quite frequently just to see Roberta [Armani] and all the gang that works for Giorgio and we just hang out a little bit,” said Tina Turner, who is also trying to learn Italian.

The sense of extended family was underscored by Hilary Swank. “You know, I actually have so many Armani moments but one of the things in my mind is just Armani as a family because they are so authentic and they stayed true to themselves for all these years, and I think that this Silos — which is opening to the city — is something that people are really gravitating toward.”

A longtime supporter of the designer, Sophia Loren said she first met Armani in Paris when he was working at Nino Cerruti. Asked about her regularly attending his events, she simply responded: “Always, just like real friends do.”

Chris Pine, the face of the Armani Code fragrance, said he was “going back to work soon on a film called ‘Comancheria’ with Jeff Bridges and then ‘Star Trek 3’ in June.” Recalling his favorite Armani moment, Pine said: “I felt pretty good in this incredible tux that I had this last Oscar weekend. A double-breasted number — I thought it was beautiful, kind of Old Hollywood.”

Stefano Pilati said: “Mr. Armani and myself have known each other for so many years and there has always been a certain feeling between us.” Pilati is working on both the Ermenegildo Zegna spring show and the Agnona Resort collection to be presented in June.

Guests then walked across the road to the Armani theater to take in a selection of around 160 looks from the designer’s Privé collections over the years.

Earlier in the day, Armani gave a tour of the new Silos space. “Silos helps me take stock of things,” he said.

Walking tirelessly up and down the flights of stairs of the new space, Armani on Thursday underscored that the 40th anniversary of his company and the display of around 600 of his signature looks at the venue allow him to show his innovations through the years. But he is looking forward as well as back with numerous projects. First up is his autobiography, published by Rizzoli and due out in September during Milan Fashion Week. “I wanted to share personal thoughts and moments, the ones that I choose to share — there are others nobody will ever pull out of me,” he said. The designer is also mulling the idea of restoring a building complex near Silos with another exhibition area to showcase either looks from his Privé couture collections or from the Emporio Armani line.

Reflecting his rapid-fire thinking and undaunted energy, Armani said he doesn’t like to refer to Silos as a museum. “I don’t want this space to be static; [I] plan to renew the displays with pieces from the new collections every six months,” he explained.

The Silos building, constructed in 1950, was originally a granary of the Nestlé company and, after the renovations, covers around 48,600 square feet on four levels. Armani, whose Tadao Ando-designed theater stands on the opposite side of the street, conceived and oversaw the renovation project himself.

During the walk-through, he didn’t shy away from revealing that the project struck an emotional chord. “This job doesn’t allow you to dream much, you must have your feet planted on the ground. I will be 81 in July and dedicated almost all my time to work,” he said. The designer also lamented a certain homogenization of tastes today, underscoring his never-ending desire to make women look more beautiful. “Now, they put on a pair of leggings and a jacket, and they are good to go.”