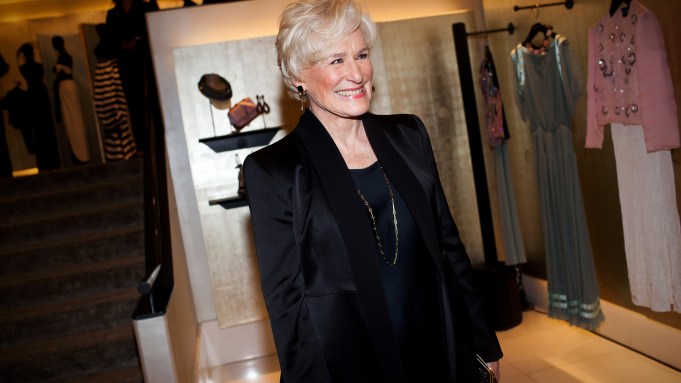 Glenn Close had quite the glamorous Saturday: After scooping up the Indie Spirit Award for lead actress in the afternoon, she headed over to the Giorgio Armani boutique on Rodeo Drive, where she did a quick change upstairs from her custom Sies Marjan suit into an elegant black Armani jacket and pants.

The woman of the hour was toward the back of the store, fielding greetings and requests for selfies.

“The first important blazer I bought was a black, double-breasted Armani, it was in the Eighties when they had those amazing shoulders,” Close said. “And then the first fancy dress I borrowed was from Armani, for the first Kennedy Center honors I went to [in 1984]. I still have the blazer. I probably have all my Armani suits because all through the Nineties, that’s all that I wore.”

The awards season has provided her with many opportunities to get to know her fellow nominees, with “Roma” actress Yalitza Aparicio emerging as a standout.

“I feel like we have this bond: I love Mexico, I worked with Rodrigo García on three significant movies for me, and I have a house in Mexico. There’s just something about her that I just feel connected to,” she said of Aparicio. “And also Melissa McCarthy; we’ve been able to hang out a little bit. I love her. It’s crazy; you have all these events like this and you can’t really talk but, you know, you kind of hang.”

As for the big day’s plans, she and Starke plan to have a mother-daughter grooming party.