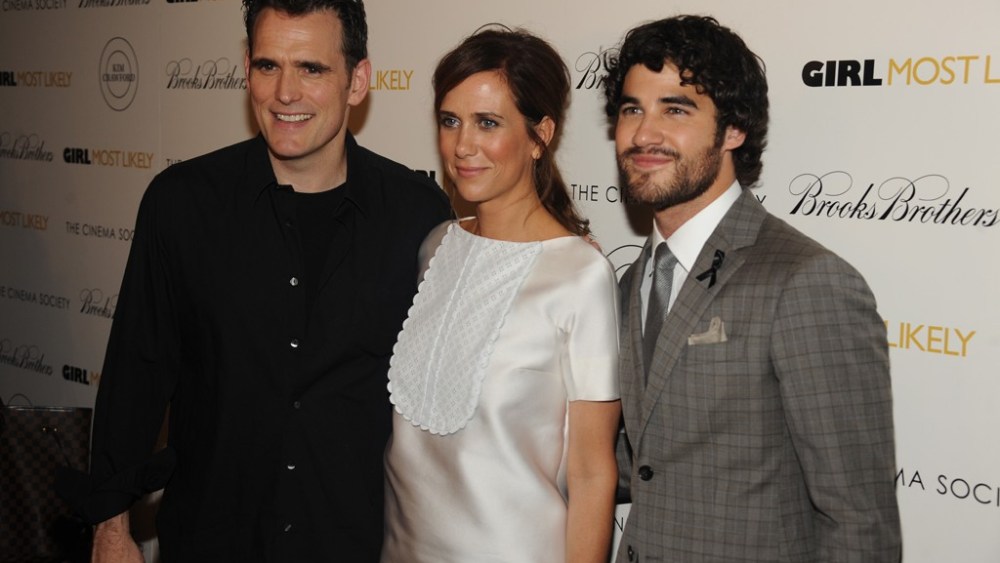 Screenwriter Michelle Morgan was midsentence when she pounced on directors Robert Pulcini and Shari Springer Berman for a flying bear hug. “This is unusual, when writers and directors get together,” she said.

“Girl Most Likely,” Morgan’s semiautobiographical self-described “screwed-up comedy,” was about to be screened at the Landmark Sunshine Cinema in the East Village on Monday night for a Cinema Society- and Brooks Brothers-hosted affair, drawing the likes of Vanessa Williams, Rachel Dratch, Olivia Palermo, Padma Lakshmi, Fern Mallis, Rachel Roy and Cory Kennedy. A press-shy Darren Criss wore a black ribbon on his suit lapel, a nod, perhaps, to the sudden death of his “Glee” costar Cory Monteith two days prior.

The film stars Kristen Wiig as Imogene (the film’s original title, “Imogene,” apparently wasn’t well-received by test audiences because too few understood that it was a girl’s name), a failed, thirtysomething, Manhattan-based playwright forced to move back to Ocean City, N.J., with her mother, played by Annette Bening, who behaves more like a rebellious teenager; and her brother, a nerdy shut-in who’s obsessed with mollusks. Producer Celine Rattray described the film as a “love letter” to the Jersey shore; filming wrapped up right before Hurricane Sandy, and several locations featured in the movie were badly damaged as a result.

Wiig looked back fondly on one of the film’s final scenes. “There was one moment in the limo at the very end when we were all celebrating — it was like two in the morning. Chris Fitzgerald plays my brother in the film, and I was calling him by his real name, Chris. And he was looking at me like I was having a stroke,” she said.

After the film, guests cabbed it across town in the humidity to Hôtel Americano’s rooftop bar in Chelsea. The thing about open rooftops, of course, is that they don’t have air conditioning. Several partygoers could be found perched in front of the gigantic floor fans or sipping on Purity Vodka cocktails to keep cool; Madonna’s “Burning Up” had never seemed more appropriate. Mickey Sumner, who had a small role in the film, posed for photos with her mother, Trudie Styler, another one of the film’s producers.

Matt Dillon, who plays a dubious CIA operative in the film, reflected on his time spent in New Jersey in his youth. “I remember seeing The Clash play at Asbury Park. And I’ve spent way too much time in [Atlantic City]. Take it up with my accountant — he’s not too happy,” he said.