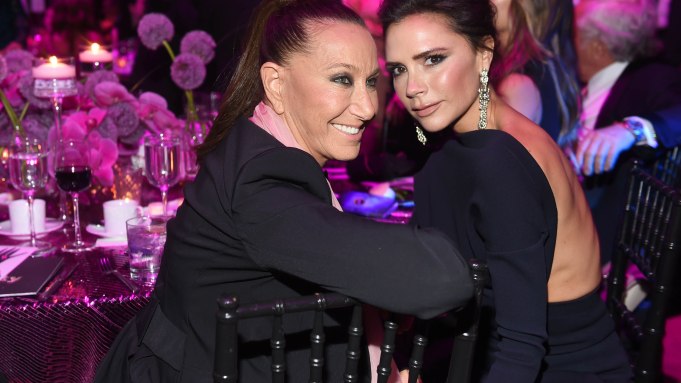 On a night when the Breast Cancer Research Foundation raised nearly $6 million, the theme seemed to be girl power.

In a new home at the Park Avenue Armory on the Upper East Side, nearly 1,000 guests turned out for The Hot Pink Party, cochaired by Victoria Beckham. William Lauder, executive chairman of the Estée Lauder Cos., and Kinga Lampert were also cochairs.

Beckham exuded girl power behind the scenes before the event, talking about the expansion of her Victoria Beckham for Estée Lauder makeup collection to China.

“It started as girl power with the Spice Girls, and now it’s about empowering women through fashion and beauty,” Beckham said. “[It’s about] women supporting women and us making women feel and look like the very best they can be.”

Beckham takes off soon for her Chinese tour to promote the cosmetics collection, starting in Hong Kong and moving to Shanghai and Beijing. The circuit includes stops at Raffles City Shanghai, Isetan Shanghai, Sephora Shanghai and a freestanding Estée Lauder store there. The Raffles event will be live-streamed on Tmall, a first for Beckham, she said.

“What I love about going to China — I love the women, I love speaking directly to the women,” Beckham said. “They have very strong family values in China, and that’s something that’s very important to myself and David [Beckham, her husband] and the Estée Lauder family.”

“Communicating with women [and] empowering women is why I’m doing this,” Beckham noted.

In China, she will be acting as her own influencer.

“The reality is people understand authenticity anywhere in the world — authenticity is what it’s about,” said Jane Hudis, group president at Estée Lauder.

“Social media is incredibly important to me, as well as to Estée Lauder,” Beckham said, adding that e-commerce is also key. “It’s so huge and it’s growing at a rapid rate, which is very exciting.”

Hudis and Beckham were joined by a slew of Lauder executives.

“The full constellation is out tonight,” said John Demsey, executive group president of Estée Lauder. Indeed, Lauder executives were out in full force, with president and chief executive officer Fabrizio Freda noting the progress in breast cancer research and chairman emeritus Leonard Lauder musing on the state of retail.

“The good news is that it looks like we’re making serious progress, closer to the best possible cures, even better than the ones we have today,” said Freda. “The future is the cause, there is success and there is progress and we see the results every year.”

As usual, Leonard Lauder was the lead speaker of the evening — but chatting off stage, conversation wandered to his favorite subject: department store retailing.

“We all knew for many years the nation was overstored,” he said. “It came time to pay the piper, so that’s a little bit of an adjustment. You see some winners and losers but at the end of the day we will all survive. It’ll be different but we’ll all survive.

“They have to sell stores, some will be rebranded, some will sell, some will survive and that’s the way the world works,” Lauder continued. “The only difference I know is this — we have stores that have a small shareholding like Nordstrom — they tend to be long-term players. You have Dillards, Saks, Hudson’s Bay…You’re going to end up with over half of the retailers in America closely held, and when that happens you’ll see a different world, they’ll do what has to be done.”

On the beauty retail side, Ulta Beauty senior vice president of prestige merchandising Tara Simon noted the retailer had raised $4 million for BCRF for the year.

“We’ve got some of our general managers here, which is really awesome. It’s eight general managers, salon managers and district managers,” Simon said. “They’re very committed to the cause, we raise money all year for BCRF, we have some more specific fund-raising activities in our stores in October.”

Sir Elton John, who normally performs at the event (this year it was John Mellencamp) sent video greetings from afar, and donated $50,000, which was later matched by an attendee. The highest ticket item of the evening was a Pat Steir “Waterfall” painting that went for $300,000.

Vera Wang, an event regular, spoke of her friendship with late BCRF cofounder Evelyn Lauder. “Any time I needed her help on an event or anything [she was the person to come in and help],” Wang said. “This was her cause. She did more for breast cancer research than anyone I know.”

Wang also mused on what she referred to as a “frantic New York social season,” mentioning that she was coming off the Met Gala and bridal week and looking ahead to the CFDA Awards.