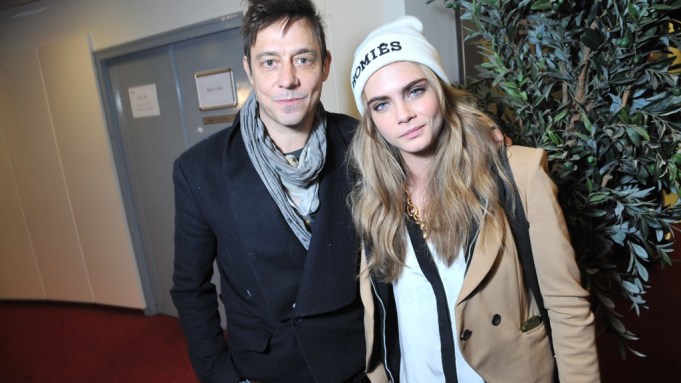 GIRLS ALOUD: An all-female band stepped out on the stage of Etam’s annual lingerie and swimwear extravaganza in Paris on Tuesday night, setting the tone for the high-street brand’s “Girls Only!” performance.

Lily Allen, making her musical comeback after a near three-year absence, hit the stage with Rita Ora, M.I.A., Lykke Li and Selah Sue. Allen, who gave birth to her second daughter in January, waved to front-row guests Cara Delevingne and Mary Charteris, who sang along to her hit song “Smile” and snapped pictures on their iPhones.

Delevingne seat-danced her way through the event, mouthing the lyrics to all the performers’ songs in between pulling funny faces, blowing kisses and giving encouraging winks to the models strutting around the stage in skimpy neon or black lace lingerie accessorized with feather wings, tiaras, bridal veils and the like.

Joining the Brit crew were Jamie Hince, Kim Jones and a Kenzo-clad Joséphine de la Baume, whose husband, Mark Ronson, again produced the Etam show, which this year was broadcast live in 20 movie theaters across France.

Wearing a black dress with a white Peter Pan collar by Rochas, Ludivine Sagnier pumped her fists as M.I.A. stormed the stage singing “Bad Girls.” The French actress will be seen next month in “Love Is in the Air,” a romantic comedy about two characters who find themselves seated next to their exes on a plane.

Emmanuelle Seigner said she is filming “Venus in Fur,” directed by her husband, Roman Polanski. Cécile Cassel groaned when asked to pose with bad-boy French rapper-cum-actor Joey Starr, while Isabelle Adjani was barely visible under the giant fur collar of her black Comme des Garçons coat.