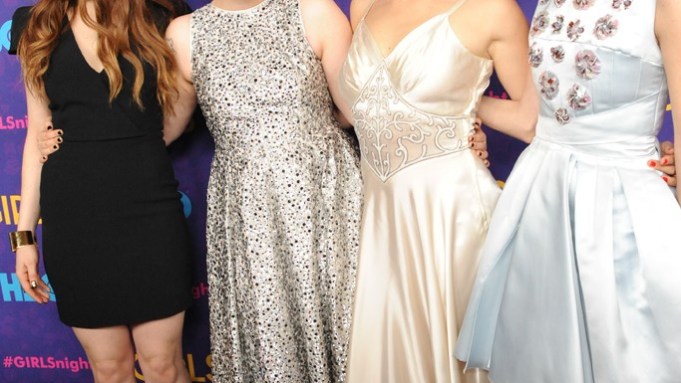 From the moment Lena Dunham’s show “Girls” appeared on HBO two years ago, it’s been the subject of breathless press coverage that deemed it a cultural game changer, “revolutionary” even, as New York magazine dubbed it on a cover story at the time.

For all the think-pieces and accolades, the fashion world took its time to fully embrace the television juggernaut. Previous premieres were dutifully attended mainly by stars from the worlds of comedy and entertainment.

But with the third season, fashion has finally caught up to the hype, and turned up in force to the premiere Monday night at Lincoln Center. Models Karlie Kloss, Karen Elson and Hilary Rhoda; designers Nicole Miller, Cynthia Rowley and Zac Posen, and editors Joanna Coles and Amy Astley were all in attendance.

Dunham may be about to crack a glass ceiling of a sort — the cover of Vogue. February’s, that is, though the magazine, citing standard policy, did not confirm the news to WWD.

Short of a full-fledged cover announcement, editor in chief Anna Wintour gave the show a highly prominent endorsement by also attending the premiere, though she only managed to stay for two of the 30-minute episodes screened. She bolted from her seat at the Rose Theater as soon as the credits rolled, as daughter Bee Shaffer caught the third episode.

Among the loudest cheerleaders Monday night were the models.

“There is something to it that’s completely fresh and modern and indicative of our generation,” Elson said at a party at the Allen Room hosted by HBO and the Cinema Society. “It’s going to go down in the history books as a show that represented the time and place we’re in now.”

Kloss said the main draw was the show’s relatability.

“I’m like Hannah,” the 6-foot, 1-inch model said, referring to Dunham’s character on the show. “Some of those things in the show are too real, like I’m going through in real life, just the normal struggles as a young girl in your early 20s in New York City, figuring things out.”

Though on Monday night, the Vogue cover, long the subject of rumors, was still only wishful thinking, Kloss was enthusiastic about the possibility.

“So many young women around the country really respect and look up to Lena Dunham because of how true to herself she is. She is so beautiful for how real she is,” she said.

Jenna Lyons echoed some of the praise the show has received for its candid presentation of young women on television.

“[Dunham] allows for flaws and imperfections and mistakes, and it’s so unusual in television because, particularly for young women, there’s so much expectation to be perfect and tan. She doesn’t care about any of that stuff. She creates a whole space of absolute openness, that what’s on your brain, however crazy it is, is probably more interesting than what’s on your body.”

She didn’t think Dunham would be so out of place on the cover of a fashion magazine like Vogue.

“If you think about what Vogue puts on their cover, they put beautiful, interesting, smart women who aren’t necessarily models,” Lyons said, name-checking First Lady Michelle Obama, Adele and Beyoncé. “What’s inside is probably more important than what’s outside. It’s the same message ‘Girls’ is trying to send.”