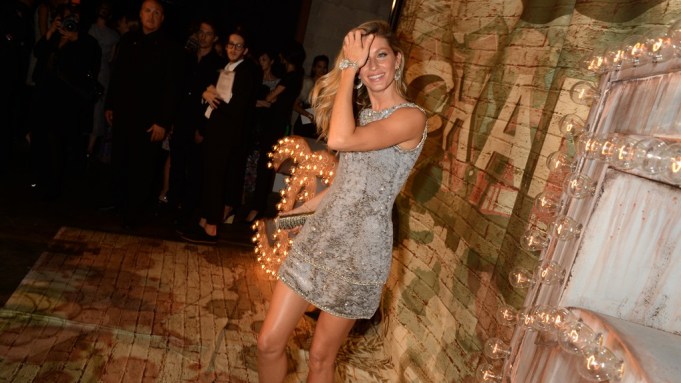 “Do you like it?” Gisele Bündchen asked Monday night, holding up her dainty wrist. A beat (being in her presence does take a second to process). “I think it’s almost gone,” she concluded, sniffing the spot herself to check.

It was hardly the first time anyone at the party had wafted Chanel No.5, but nonetheless Bündchen was doing her due diligence as the new face of the fragrance. The model appears in the Baz Luhrmann-lensed short-film-cum-ad-campaign, which was imminently to be unveiled. Though, apparently, no one had seen it before the party.

“I only saw a rough cut in the beginning. I’m waiting to see it finished,” Karl Lagerfeld said during cocktails. When asked if he had plans to relive the fashion protest of the spring show for this occasion, the designer shook his head. “No, no, no,” he said. “This dinner was not organized by me.”

Hadid said she really enjoyed protesting. “It was just after I watched the Emma Watson ‘He for She’ speech, so that kind of gave me like a really new beautiful, like, meaning to, you know, feminism,” she said, adding that the protest needed a jolt of energy after the first practice. “It was funny because in rehearsal, we went out there and we all went silent. We were all so shy. No one wanted to yell anything. So we all kind of shrunk. No one wanted to lead it.”

Bündchen, who ended up leading the charge, arrived at the party moments later, garnering just as much attention as she did in the show, though without a Chanel bullhorn this time. She emerged like a glimmering disco ball between her blinding-white smile, the metallic sheen from her mile-long-legs and her sparkle-strewn minidress. It was a spectacular antidote to the gray rain outside. She hammed it up for photographers on the step and repeat — she is a supermodel, after all — blowing kisses and hopping around before being pulled over to the press.

“I feel so honored,” she said. “It’s the most iconic fragrance ever and with the women who came before me.…I was actually asking [my agent], ‘Are you sure they are calling for me?’”

She trotted through the room, insulated by a fleet of bald bodyguards and snippy acolytes, stopping frequently to give beijos to her well-wishers. “Hello baby,” she purred into Patrick Demarchelier’s ear. A circle later, “Thank you, baby,” she smiled to de Maigret after the two took a selfie. She eventually made her way to a corner booth in the dining room, curling up between Lagerfeld and Luhrmann.

The film screened to a rapt audience. It has Luhrmann’s signature gloss to it — hypersaturated hues and hints of old-world razzle-dazzle. In it, Bündchen believes her husband has left her (yeah, OK), only to discover he’s actually left a note for her telling her she’s “the only one that I want” (it was the title of the film and the official hashtag of the evening). The two reunite at a nightclub where Lo-Fang is crooning a jazzy interpretation of the “Grease” original song. The film will begin running online today, while two shorter cuts, 30 and 60 seconds long, respectively, will start running on TV for the holidays. Print advertising will begin running in December fashion, beauty and lifestyle magazines.

Luhrmann, who served as the ringmaster of sorts for the evening, introduced the film. Onstage, he recalled his first No.5 commercial featuring Nicole Kidman 11 years earlier, waxing on about the difference between then and now. “I spent quite a lot of time on it, and we really got into the research, but I shouldn’t digress…” he said. “If I am, are you out there?

“Yes I am, hurry up,” a voice — with notable Aussie twang — chimed in from the audience.

“The voice in the darkness is Catherine Martin, my wife,” Luhrmann said. “That’s all right darling, just jangle your Oscars. You have no idea what it’s like at breakfast. She slams all of them down.”