The model and the designer hosted a viewing of her portraits in New York on Wednesday. 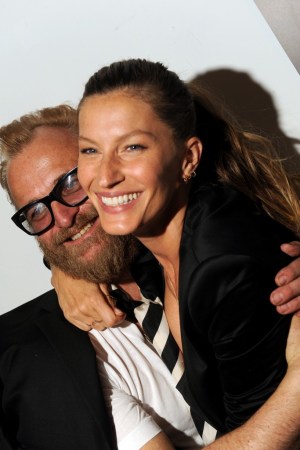 BLK DNM’s lofty SoHo boutique was transformed into a gallery on Wednesday for a private viewing of “Gisele in BLK DNM,” an exhibition of 25 portraits label founder Johan Lindeberg shot of Gisele Bündchen, who appears in the brand’s latest “Wild” poster campaign. Models and fashion kids repping the downtown uniform — all-black everything — joined the likes of Waris Ahluwalia, Richard Phillips, Pamela Love and Marina Abramovic, who caught up with Michael Avedon before being swept away by Lindeberg for a personal tour of the exhibit.

The black-and-white photographs on display showed Bündchen topless (but never frontal), barefoot and without makeup.

“Coming from Sweden and the dark winters there — I maybe have an Ingmar Bergman influence — but I like expression,” said Lindeberg. “I’m a massive feminist. I’m the one who thinks that women should take over completely. To portray women as who they are — I see it more like a documentary portrait. I’m antiretouching and [anti-] plastic surgery. I think a woman is beautiful how she is.”

Bündchen was accompanied by her sister Gabriela, as well as her mother- and sister-in-law, Galynn and Nancy Brady. Her slightly tardy arrival had caused a palpable sense of anticipation — and then excitement — amongst revelers.

“So many times when you’re doing pictures, you have to look a certain way and it’s very contrived, and you’re not very free to be able to express yourself in that raw, real way,” Bündchen said. “It was just an opportunity to go in and create something without any boundaries and expectation — free-form, no makeup, no hair. We were [in this warehouse] for like an hour. I think he sees women in a beautiful way. He’s an artist in that way; he’s not just a designer.”

She began typing out the caption for an Instagram photo after posing with her sister. Her agent, Anne Nelson, doted over her shoulder, explaining how to tag someone.