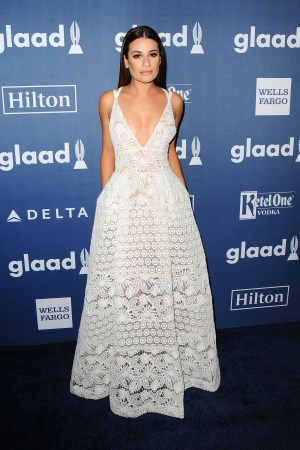 Hollywood shined a light on the LGBT community Saturday night when some of its biggest stars turned out for the GLAAD Awards. Demi Lovato, Queen Latifah, Caitlyn Jenner, Lilly Wachowski and Ruby Rose were among the honorees and winners at this year’s event, held on Saturday night at The Beverly Hilton hotel. The ceremony, which was hosted by Ross Matthews and will air Monday night on Logo TV, doles out awards to programs and individuals who have raised awareness for the lesbian, gay, bisexual and transgender community.

Taylor Swift made a surprise appearance to present Rose with the Stephen F. Kolzak Award. The “Orange Is the New Black” star looked as shocked as the audience as the pop star strode onstage in a long, navy Haney dress. “Tonight I’m here to honor someone who through her words and through her actions proves that she’s a force of nature,” Swift said.

“You can’t just Taylor Swift somebody,” Rose said, visibly overwhelmed. “That’s not a thing. That’s not fair. I’m a really emotional person and I had to go through all the possible things that could happen that would cause me to cry.” She paused. “I didn’t think about Taylor Swift coming and giving me the award.”

Latifah picked up an award for her HBO film “Bessie.” Director Wachowski, who recently came out as transgender, four years after her sister and fellow “The Matrix” filmmaker Lana, made her red-carpet debut as she accepted an award for Outstanding Drama Series for Netflix’s “Sense8.”

For Outstanding Reality Program, there was a tie between Jenner’s “I Am Cait” and Jazz Jenning’s “I Am Jazz.” “I’m actually a woman of many talents and brevity is not one of them,” joked Jenner. “What a year it’s been. A year ago, I’d heard of GLAAD, but really didn’t know about GLAAD. I’d never met another trans person. I suffered on my own, as so many people in this room have such a difficult time coming out and being their true self.… It’s a long struggle. For me, it was only a measly 65 years. But the last year has been the most rewarding year of my life.” Midway through Jenner’s speech, someone in the audience called out “charlatan.” Jenner forged ahead and proceeded to thank the girl squad that stood behind her.

To cap off the evening, Lovato sang a piano ballad titled “Stone Cold” off her current album before receiving the organization’s Vanguard Award presented by close friend Nick Jonas. “I’m PMS-ing,” she said, as she choked up. Lovato went on to give an “off-script” speech about the importance of being oneself and concluded by thanking boyfriend Wilmer Valderrama and adding, “I’m actually getting a cat next week. I’m getting a pussy and naming it Harry and it’s a girl. Gender equality, right?”