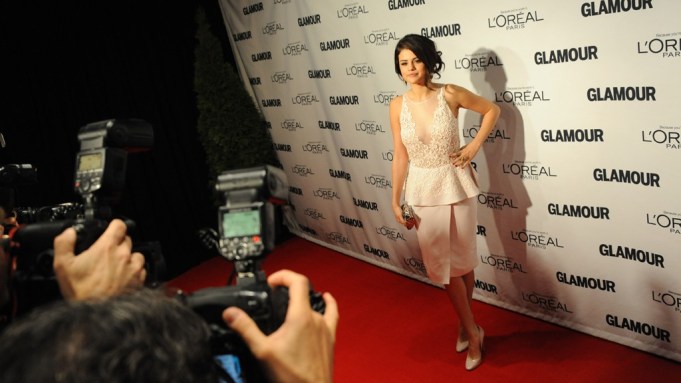 Arianna Huffington was hobbling all over the Monkey Bar Monday night, propped on a shiny black cane, when she spotted Tyra Banks in one of the booths and limped to her table. The two hadn’t seen each other in years — Huffington once appeared on Banks’ talk show, in an episode titled “Becoming Fearless” — and Huffington wanted to reconnect. They are two of the most plugged-in women around, present in just about every media channel, but, somehow, they didn’t have each other’s numbers.

Banks handed her phone to Huffington’s daughter Christina, and barked, “Will you put your momma’s stuff in there for me?”

They were in the restaurant for the dinner following Glamour’s Women of the Year awards at Carnegie Hall, the magazine’s annual circle cry, now going 22 years strong. Immaculately staged, the two-hour ceremony had better production values than some rickety televised awards shows. In a moving speech, filmmaker Sharmeen Obaid-Chinoy pleaded the crowd to take note of oppressed women in Pakistan. Activist Erin Merryn gave a heartfelt testimonial about sexual abuse. Selena Gomez looked cute in her microscopic dress.

Among the other guests at the restaurant were honoree Supreme Court Justice Ruth Bader Ginsburg and Mary J. Blige — unfortunately not seated together — as well as Chelsea Handler, Ethan Hawke and honoree Annie Leibovitz.

Huffington, who was seated next to honoree Zaha Hadid at the Monkey Bar, was familiar with the event’s tearjerker tendencies. She was honored last year.

“I love the way they combine the moving and edifying with the entertainment, like having Cory Booker, having Lena Dunham, having the Nora Ephron speech. They really captured the year,” she said, itemizing some of the highlights of the evening. Cynthia Nixon and Meryl Streep’s daughters, Grace and Mamie Gummer, both read passages from Ephron’s 1996 commencement speech at Wellesley.

Said Banks, “I remember Hillary Clinton and Condoleezza Rice were both honored the year I was honored, and both of them said my name in their speeches, and I was like, ‘What?’” Asked what her favorite moment was in a night full of touching stories, Banks cited “American Idol” winner Phillip Phillips’ performance.