Glamour Honors Its Women of the Year 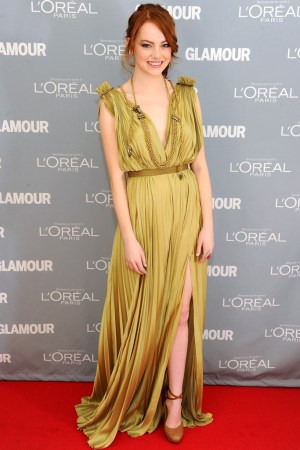 Jessica Alba, wearing a short, black sequined dress made the long walk across Carnegie Hall’s stage Monday night to present the first award of the evening to Tory Burch, one of Glamour’s Women of the Year. Alba was later asked if she often wore Burch’s clothing. “Oh, she means so much more to me than that,” the actress said, becoming animated while talking about their new friendship. “I’m working on an eco baby brand and household brand and she has mentored me in this process. It’s so nice to have someone in the business on your side, I mean, she has a lot going on right now but makes time to help me.”

Alba’s business will have a soft launch in January.

Their relationship was just one of many powerful ones on display, with Barbara Walters presenting an award to Arianna Huffington (Walters was a bridesmaid in Huffington’s wedding) and Anita Hill honoring Gloria Steinem, who recalled working for Glamour in her 20s. “I went to the editorial meetings and dressed myself in samples from the photos,” said Steinem. “I discovered my favorite brand of cosmetics was ‘free sample, not for sale.’”

Marc Jacobs introduced artist Cindy Sherman, who directed his 2006 ad campaign, and Jennifer Aniston, wearing her trademark black gown — this time, from Versace — arrived with Justin Theroux for pal Chelsea Handler. “It was not love at first sight,” Aniston explained. “Like most logical people in the entertainment world, I only appeared on her show so she wouldn’t talk s–t about me.” She paused for comedic effect, adding, “And, I really wanted to work with the esteemed E network.”

“This is such a humbling experience,” said Handler, who took the stage in a body-hugging, cleavage-baring Stella McCartney jumpsuit.

Diane von Furstenberg was scheduled to present to Jennifer Lopez but due to a conflict (the designer was across town at the ACE Awards), Donatella Versace did the honors instead. On stage, Lopez held back tears, thanking her grandmother, “who taught me to cook and not be afraid to serve and be humble and to go out looking nice because people like that and then they respect you.”

Mark Kelly, the husband of congresswoman Gabrielle Giffords, showed up to accept an award on her behalf. It was presented by Diane Sawyer, who interviewed the couple for a TV special that will air Monday.

After the two-hour ceremony, honorees got in their black SUVs for the three-block trip to the Museum of Modern Art, for a dinner of beet salad and filet mignon. Aniston posed for pictures with Steinem, before quietly sneaking out. Lopez raised the diva flag when she showed up with a new black leather dress and hairstyle. Handler chatted with former first lady Laura Bush and her daughters, Barbara Bush and Jenna Bush Hager — who were all presented awards earlier that evening. Handler’s dinner companion was Debbie Harry, who performed with rapper Theophilus London.

Emma Stone stood observing the scene, wearing a mustard yellow Lanvin gown that was mostly covered by a ratty old winter coat. “Usually you go to events and they suck, but this one meant so much,” said Stone. “Arianna had one of the greatest speeches about success and failure. I felt so connected to her.”