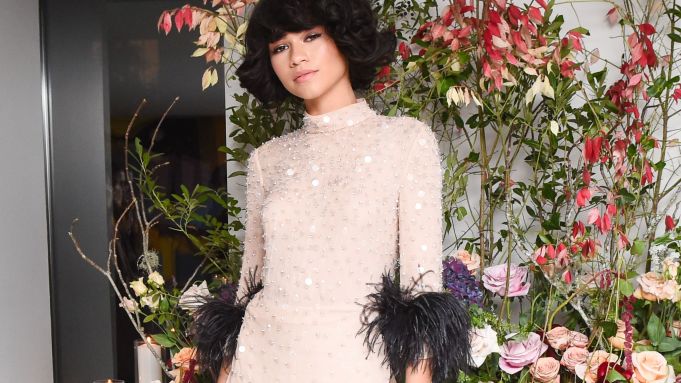 Glamour Magazine kicked off its annual Women of the Year summit and awards in New York Sunday evening with a private cocktail party at Barneys’ downtown Manhattan location.

Hosted by Glamour editor in chief Cindi Leive and Barneys New York chief executive officer Daniella Vitale at Fred’s restaurant, the intimate evening brought together a cross-section of influential women in fashion, politics, sports, entertainment and business who have been honored by the magazine in the past.

Zendaya, dressed in a matching sequined and feather-cuffed Prada top and pants, was among last year’s honorees and noted how she is constantly inspired by the strength of women who have come before her. “Right now I’m obsessed with that glamour of the sixties and seventies,” she said of her retro-inspired look. “I was looking at a lot of pictures of Diana Ross before I came here. It’s about powerful women and what it means to be a modern version of that.”

The 21-year-old looked around the room in admiration of the other guests including Huma Abedin, Christiane Amanpour, Liya Kebede and Olympic athlete Ibtihaj Muhammad. “It’s cool to have spaces where [women] appreciate each other,” she said. “It’s so important, especially now.”

Next month, the 21-year-old releases her latest film, “The Greatest Showman,” in which she plays a circus trapeze artist. “The best Christmas gift [for me] is that the movie will come out and my family gets to see what I’ve been doing. My mom is so excited [and she] probably is going to cry.”

Ashley Graham, who was also honored at last year’s awards, noted how “the pressure is off” in not having to prepare a speech this time around. The curvy model, who has helped shift the fashion industry’s perception of body image, observed it is important for women to remain true to their own spirit.

“Women who are just being themselves, people are calling brave,” said the 30-year-old who dressed in a blue satin dress from fellow party guest Prabal Gurung. “I think we have to step away from that and let women be women for who they are because of their strength.”

Responding to the increased role of body size diversity in fashion, Graham revealed her relief at “not being a token anymore,” while noting her leading position in the forefront of the industry movement is “an honor and a job I don’t take lightly.”

Barneys’ Vitale said her leadership role at the venerable retailer sends a message of inspiration to others hoping to follow her path. “We’re a company that’s dominated by young women,” she explained. “It’s important for me in changing the organization by creating more opportunity for women. It’s less about me being ceo and more about making sure I’m the example for young women to say you can absolutely be ceo and should be ceo.”

In an effort to reflect the current political and social challenges, Vitale and her team chose this holiday season to outfit the Barneys store windows not with a typical winter wonderland scene, but with a “neutral campaign that is more about inclusivity, diversity and freedom of expression.” The windows, which will be unveiled on Thursday, will “deliver a power message” that “feels very relevant and important to what is going on in the world.”

The magazine’s annual honors, which takes place Monday with a summit at the Brooklyn Museum and awards ceremony at the Kings Theatre in Brooklyn, will be the last for Leive who is leaving the Condé Nast publication in December after 16 years.“I can’t tell you my next move, partly because I don’t know what it is,” remarked Leive.

The 50-year-old executive, who dressed in Dior for the cocktail party, noted how her best advice to other women is to “stop asking for permission.” Leive added, “The message here is to listen to your own instinct and your gut and if you feel like the existing systems aren’t serving you well, go out and make your own.”