Ralph Lauren, Michael Kors, Carolina Herrera, Alber Elbaz and more turned out to The Carlyle hotel to celebrate the editor in chief. 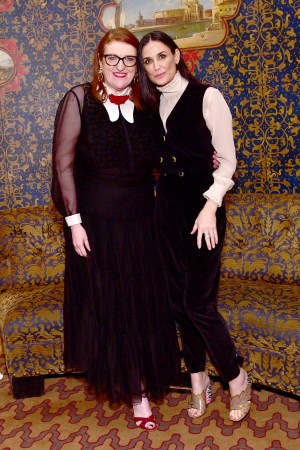 The evening began with Champagne toasts from Hearst Magazines president David Carey and Hearst Corp. executive vice chairman Frank Bennack Jr. “I always refer to Harper’s Bazaar to my friends, family and others as being predictably unpredictable,” Carey told the crowd. “We know it’s going to be great, but we’re never quite sure exactly what will be in the next issue.”

Bailey — known for her no-nonsense attitude, her humor and her daring cover shoots, for instance, she once phoned Demi Moore, who was on hand for the evening, to ask if the actress would be willing to pose next to a giraffe on a floating staircase — reflected on her tenure at the glossy. She told WWD she welcomes the changes brought on by today’s fast-paced media climate. “What I love about technology is that we can cover the news on a moment-by moment basis, but then we can cover the bigger picture, this beautiful imagery where people can dream…I love that balance,” said Bailey, clad in a ruffled Gucci frock.

She added that the best part of her job is collaborating with photographers, artists and writers — and making the most of other people’s talent. “The best thing about working at a monthly glossy magazine is that you get a chance to indulge your creativity, and to come up with stories that make the news — that don’t just report on the news but create it,” she said. “That’s the most fun. I love to inject fashion with a sense of humor and have fun along the way.”

Though most designers were quick to note Bailey’s optimism and warmth, Donna Karan praised one of the editor’s lesser known strengths — her psychic abilities. “When I met Glenda in London for the first time, she read my palm, and I was like, that’s it — we’re in love,” Karan said. “She was totally accurate. I saw her the other day and said, ‘Glenda, I need a new reading to find out what’s happening in my life.’ She’s painted me gold, God only knows what else….She once had me on a roof with two guys in a headstand [in a photo by Douglas Friedman]. If there’s fun, you shoot with Glenda.”

Herrera echoed the sentiment. “Glenda knows exactly what she wants, but she does it in a fun way,” she said. “Fashion shouldn’t be that serious.”

Gucci creative director Alessandro Michele — still in town following Monday night’s Met Gala — personified the label’s eccentric maximalism in a silk teal bomber jacket layered underneath a white, studded leather motorcycle jacket and pearl-accented loafers. “Glenda’s that kind of English person that I totally love,” Michele said. “She’s funny, she’s intelligent, she’s curious….We have kind of a love affair. We went out and had some dinner together and we laughed. You can’t imagine how much we laugh.”

Tommy Hilfiger revealed his kinship with Bailey’s long-term partner, Stephen Sumner. “Stephen and I have so much in common — we are both obsessed with art and fashion. Whenever we’re together with him, Steve and I get into these lengthy conversations about art and music, and [Glenda] probably thinks I’m really rude,” he said with a laugh.

At the Met Gala, Hilfiger outfitted Gigi Hadid in a chiffon gown with a silver sequined bustier. “Gigi was at our table, Hailey Baldwin was next to her and Kendall [Jenner] was at the next table with the Kardashian-Jenner clan,” Hilfiger said. “Gigi kept texting, and I said, ‘So…what did Kendall say?’ Because Kendall was texting, too. And they were both laughing, because they knew that I knew they were texting each other.”

Olivier Rousteing was still reeling in the previous night’s adventures as well, having hosted his own Met Gala after party at the Gilded Lily. “We had fun, just my friends, Beyoncé, Kim and Kanye,” he said. “It was just relaxed. No gowns. Just chilling.”

Ditto to Piccioli, who spent the previous night partying at the Top of the Standard. “The [Met Gala] after party is always super cool. I love to go to the Boom Boom to see New York, and to see people with taste,” he said, listing Zoë Kravitz, Lily Collins and Rachel McAdams among the starlets who wore Valentino at the gala. “We wanted to dress different women with different attitudes,” he said. “All of them are cool in a different way.”

Elbaz made his arrival as the cocktail party wound down, surprising Bailey with a framed illustration that read “Glenda the Magnificent.” He praised the editor in chief as a mensch above all. “She is a great editor and a loyal friend — someone that supports designers,” Elbaz said. “She is there with us when we are high and when we are low, and this is beautiful.”